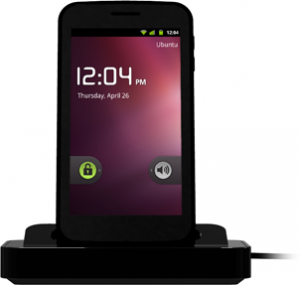 You get to the office, pull out your dual-core Android phone, and dock it to your monitor, mouse and keyboard. But the operating system that appears on the screen isn’t Android – instead, it’s the Ubuntu desktop, and it turns your smart phone into an LTE-capable desktop.

That’s Canonical, Ltd.’s vision for the upcoming Ubuntu for Android, a variant of Ubuntu that runs at the same time as Android on the same handset. And it’s shopping hard for hardware manufacturers to partner with to bring the device to the market.

“Ubuntu for Android drops in cleanly alongside the rest of Android, so it is easy to integrate into current production roadmaps,” reads the web site. “The hardware requirements are straightforward and, with a broad range of ARM and x86 hardware supported, it can realistically be added to phones already in development.”

The two operating systems will have access to each other’s data, including contact and email information. Cloud applications, it says, “are best used with a full desktop, and shine with LTE.” A phone running the hybrid Ubuntu for Android was made available at Mobile World Congress in February.

The hardware requirements are going to be steep, naturally. The software will require a dual core CPU running at at least 1Ghz, 512 MB of RAM, and HDMI output. But that’s an arrangement that works well for handset manufacturers, according to Ubuntu materials, as it will drive sales of the more sophisticated phones needed to run the software, help Android break into enterprise computing and emerging markets, and push a secondary market for docking hardware.

“In developing economies, where there is little historical PC penetration, the phone can define personal computing for an audience that has no legacy attachment to the desktop,” reads the web site. “For the next billion knowledge workers, their first PC could be their first smartphone, but they’ll need a device that can do more than just be a handset, if they really want to shine.”

Canonical made an earlier foray into non-PC hardware with Ubuntu TV, an operating system designed to run on smart televisions. It’s not clear how Google feels about the project – and if it’s worried that it could be a step toward Ubuntu usurping Android, which is also based on Linux, on mobile platforms.

Business
10 Companies Innovating with The Cloud

Technology
Mobify Announces the Launch of the Headless Commerce Accelerated Program, an 8-Week Path to Headless with Salesforce Commerce Cloud

This is a great idea, have Ubuntu run on a smartphone so that people who don’t have PCs can have a device similar to it. But we all know that smartphones don’t have many things that PCs have like a keyboard which limits their function to more on browsing.

This is a great idea, have Ubuntu run on a smartphone so that people who don’t have PCs can have a device similar to it. But we all know that smartphones don’t have many things that PCs have like a keyboard which limits their function to more on browsing.

I don’t know why, but I have some hesitations about the smartphone. Will it be able to manage successfully two operating systems simultaneously?
http://www.inscifi.net/