What does a Denver-based online pawning startup have to do with the Superbowl? Well, not much of anything which is what made Pawngo’s Boston-bashing publicity stunt just as strange as it was classless.

In one of the worst marketing stunts in startup history, Pawngo dropped 900 pounds of Butterfinger candy bars in Boston ‘s Copley Square Tuesday with a gift tag in the form of a large placard that read, “Thank you Wes Welker.” The stunt was meant to mock Patriots receiver Wes Welker for dropping a key pass in Sunday’s big game, a move now being referred to as “The Drop.” 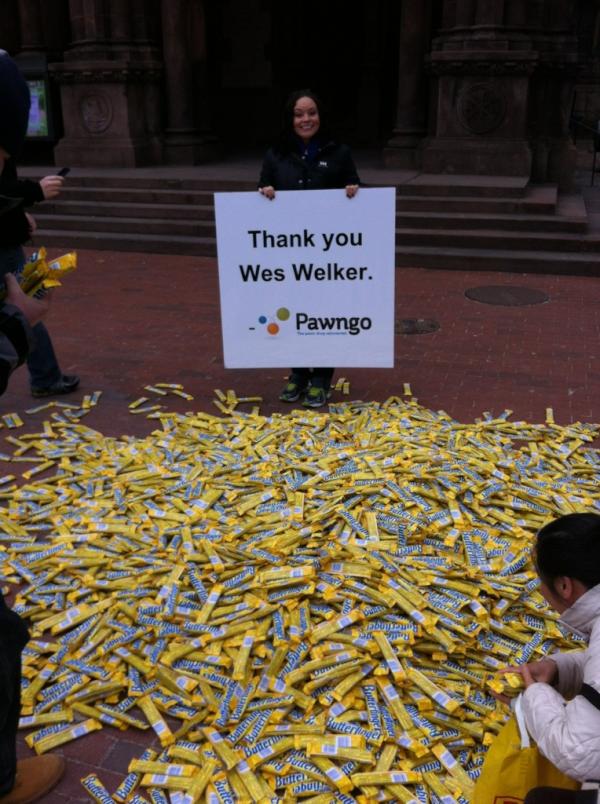 Stupid #pr tricks.Hey @pawngo , look for slower sales for you and parent @groupon in #newengland bit.ly/wav7R

@Pawngo The fact you are trying to make your stunt in Boston yesterday look like you were trying to be nice is a total lie.You are garbage

Its time to unleash the Massholes on @groupon and @pawngo and smear their names the way they smeared Wes Welker today. RT if u agree!

As an online startup without any geographic boundaries to your potential customer base, I have no idea why  you would go so far out of your way to alienate and enrage one of the nations most prideful cities. You might be thinking well, they got the press they are clearly desperate for? Right?

Yes, but they also sent an entire city running into the arms of their formally unknown Boston-based competitor.

Had no idea who @pawngo was before – but now I know their local NE competition is @pawntique.Thx! bit.ly/wON2Qm

Just a few hours ago, Todd Hills, Pawngo’s CEO & Founder, released a statement apologizing to Boston and Patriots fans noting that they “thought that Boston fans would get a laugh out of it.”

“To All of Boston, Wes Welker and Patriots Fans Across the Nation

As a die-hard sports fan, I would like to sincerely apologize for a misguided and misdirected stunt that we did yesterday in Boston.  In delivering a pile of Butterfinger bars to Copley Square in Boston, and a sign referencing Wes Welker, we were making a lighthearted gesture following Sunday’s hard fought game.   We thought that Boston fans would get a laugh out of it.  But,  for many great Boston sports fans, it was taken offensively.  Please accept my most sincere apologies.  We got caught up in the moment, reacting to a suggestion that we thought would be funny, but we were wrong, and on behalf of everyone involved with Pawngo, I apologize.”

Hills went on to note, “We will not make this type of mistake again.” Which begs the questions: Mr. Hill, are you promising to treat all your customers with respect, no matter their NFL preferences, and to abstain from tasteless PR-whoring stunts ? Or are you only promising not to dump candy  insults in the name of being a sports fan?