If you attack a beloved Internet cartoonist, the Internet will attack back. That is the lesson that content aggregation site Funnyjunk learned Monday afternoon. Cartoonist Matthew Inman, creator of the popular site The Oatmeal, unleashed his fury after being served with a lawsuit from Funnyjunk.

Funnyjunk and Inman have been feuding for over a year thanks to an earlier blog post that Inman published on his website. The post claimed that the company ripped off his work, reposted it on its site, and monetized the traffic. Funnyjunk fired back on June 2, 2012, by claiming that Inman owed the company $20,000 in damages after defaming it in the post.

In a letter addressed to Inman from Funnyjunk’s lawyer Charles Carreon, the company claims that Inman falsely accused Funnyjunk of willful copyright infringement. The lawsuit also claims that Inman used his SEO prowess to stuff the anchortext of his post with the keyword “funnyjunk” 28 times to ensure that The Oatmeal ranks higher in Google than the Funnyjunk website. Carreon ended the letter by demanding a check for $20,000.

Inman responded to the lawsuit today by publishing the suit with added annotations and commentary. At the bottom of his post, he called upon his followers to raise $20,000 for his IndieGoGo campaign “Operation: Bearlove Good. Cancer Bad.” Instead of sending the check to Funnyjunk, Inman had a better idea:

1) Raise $20,000 in donations on IndieGoGo.
2) Take a photo of the raised money.
3) Mail Funnyjunk the photo, along with a cartoon of a grotesque mom in a bikini trying to seduce a bear. 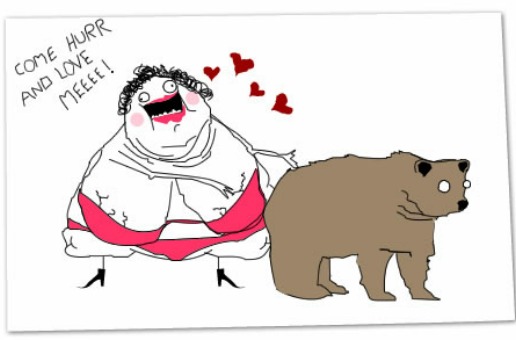 Not only did Inman already raise the money, he raised it in only 64 minutes. The load was too much for IndieGoGo’s servers, and the site crashed in the late afternoon.

As of writing this post, the campaign has raised almost $58,000 from over 4,000 backers. On his fundraising page, Inman writes: “I’m hoping that philanthropy trumps douchebaggery and greed.”

The Internet agrees. If you haven’t donated yet, you still have 14 days left to contribute to Inman’s campaign.

Inman’s campaign shows the power of collective action against troll lawyers who are trying to profit from a lawsuit that has no merit. In the real world, it’s a lot easier to scare someone into submission thanks to the cost of legal fees. On the Internet, you have millons of friends available to back you up when you need them to.

Correction: an earlier version of this post inadvertently referred to Funnyjunk as “Funky Junk”.

American Underground Founder Asks You To Know Your Role