On Tuesday November 29th, the San Francisco-based startup Path relaunched its application, Path 2, as a “smart journal” that records your daily life and shares these moments with your top 150 friends.  Path 2 has been the buzz of the tech world for several days because of its beautiful design and eerie similarity to the new Facebook Timeline. This similarity left some speculating that Path was setting itself up for acquisition.That is until around 9pm Friday night when CNN reported Facebook’s acquisition of Gowalla.

According to their description on the app store, Gowalla is a “social guide to the world’s most loved places and cities.” Gowalla was acquired by Facebook on December 2nd, 2011 for an undisclosed amount. After launching in 2009 as a direct competitor to Foursquare, Gowalla made a pivot in early September to a location sharing and “storytelling” service. The new service, although beautifully designed, did not help the company gain traction; but was enough to catch the eye of Facebook’s Timeline mobile development team. 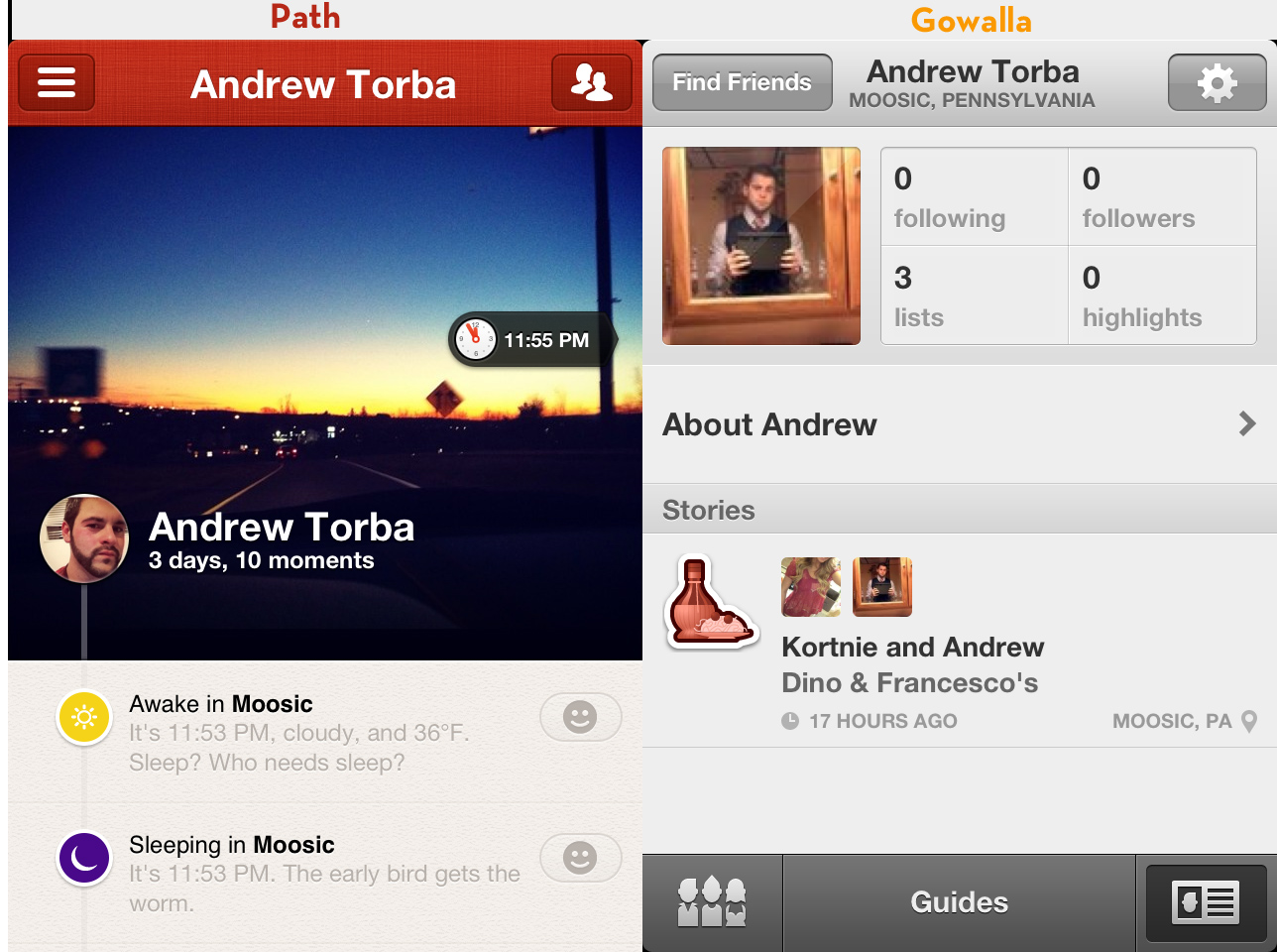 Gowalla
Gowalla’s user profile is extremely simplistic. The app places an emphasis on allowing the user easy access to their followers, people they are following, lists and highlights. Below the standard user information is a chronological list of the “stories” that the user has posted. Overall the user profile on Gowalla feels similar to Twitter’s mobile app interface with a bit of a twist.

Path 2
If you know anything about the new Facebook Timeline, you know that the standout feature is the large customizable cover photo. Path 2 takes this concept and applies it in mobile profile for its users. The user profile features a beautifully designed chronological display of activity in your life. As you scroll down your profile you will be followed by a pop-out element that displays the time and date of the posts within the feed. Path 2’s user profile is undoubtably the most intuitive organization of user data on a mobile platform to date. 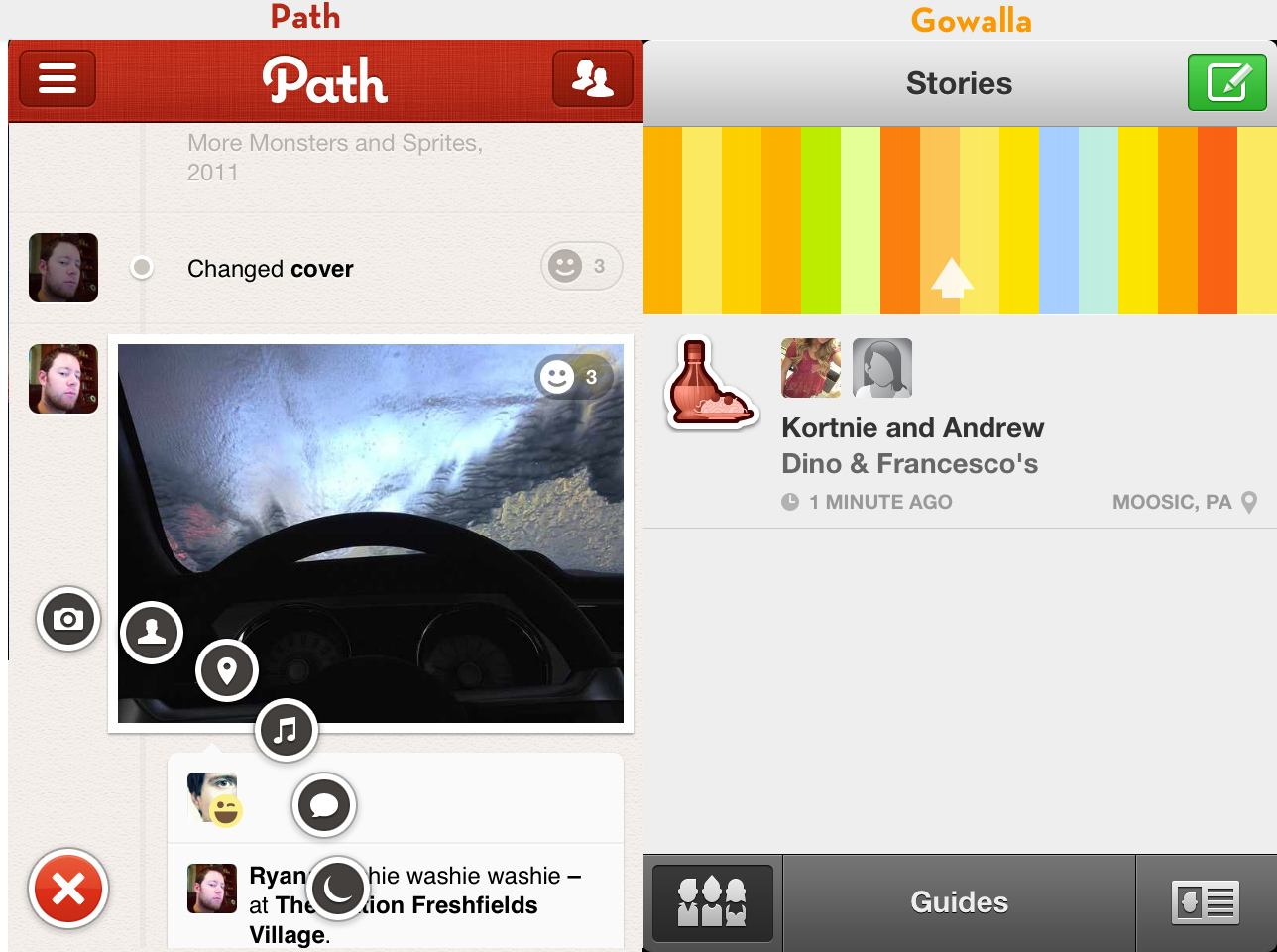 Gowalla
Gowalla has a very quirky design. One of the coolest aspects of the design is their colorful pull-down refresh feature (shown above.) Gowalla’s main feature is the curated travel guides from all corners of the globe. The design of this system was executed brilliantly, however Gowalla’s user profile design and feed seemed to fit the “standard” that we have come to recognize in social networking apps.

Path 2
I can not get over how beautiful the Path 2 app is. Their iPhone app is easy, fun, and aesthetically pleasing. Their Android app is one of the most well designed apps on the platform. Path 2 executed this design not only in their native mobile apps, but also with their web app. Although Gowalla’s app is innovative and unique, there is no comparison in terms of design when put up against Path 2. 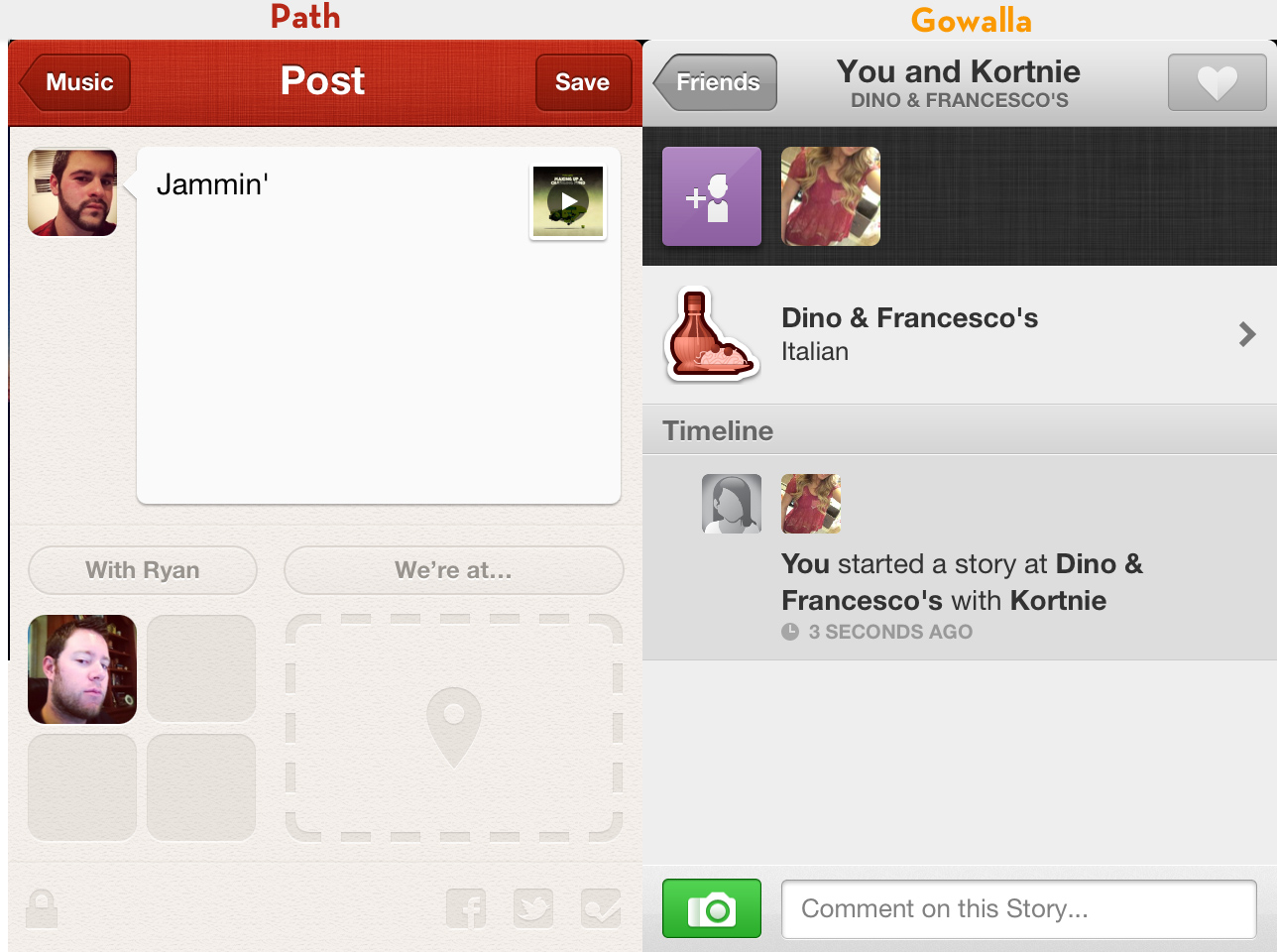 It’s the Final Round!

Gowalla
Facebook’s Timeline is centered around telling the story of your life. As Ben Parr points out, its clear that Facebook acquired Gowalla for its story telling ability. Gowalla made a pivot to the storying telling model after its initial challenge to Foursquare in the location check-in industry. The focus of Gowalla’s story telling feature  encompasses location-based stories and travel experiences.

Path 2
Path is focused on sharing content with your closest 150 friends. The cool thing about Path’s story telling functionality is ability to post music, edit photos, and even let your friends and family know that you are sleeping. I think Path 2 has a clear advantage in terms of story telling functionality. While Gowalla is strictly limited to location, place, and friends; Path 2 allows the user to share the most detailed parts of their day; thereby increasing the novelty of their story.

My first impression of Path 2 left my jaw dropped with it’s beautiful design and innovative functionality. Path 2 dominates Gowalla on all accounts. The design and functionality of the app look and feel like what Facebook’s mobile app should be. Gowalla feels more like a travel guide than a story telling app. Their stories are simply too limited. Path 2 tells the real personal story that Facebook’s Timeline was designed for, and that’s why Path 2 is this week’s Startup Smackdown Champion!