Late Tuesday night ABC’s Nightline debuted a special called iFactory: Inside Apple by Bill Weir. To start off the program Mr. Weir first fully disclosed ABC’s relationship with Apple, including the fact that Disney’s CEO Robert Iger is on Apple’s Board of Directors. Weir’s journey inside Foxconn,a multinational electronics company in Taiwan and the birthplace of all our favorite tech gadgets, began with multiple air showers. The crew was told that if one speck of dust entered the factory it could run an entire line.

The development line includes 141 steps and is lined with thousands of workers, most who were around the age of 17 or 18. The line is micromanaged by a Siri-like fem-bot that feeds the workers instructions nonstop throughout their entire shift. The people work in dead silence, and many did not even bother to look up as the camera crew walked through the building. 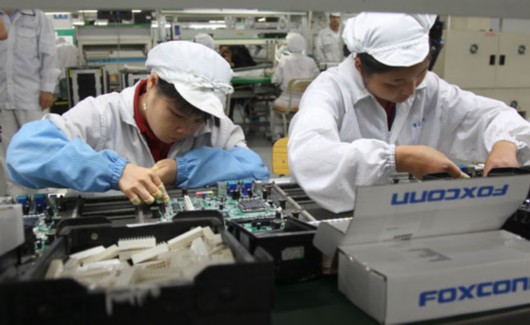 Workers are paid $1.78 an hour to work twelve hour shifts. In total they generate $21.36 per work day, but many pay $0.70 during their break for a plate of meat and rice. Some are so tired that during their break they take naps in their dorm room that they share with seven other workers. For the luxury of these dorm rooms workers pay up to $17.50 a month.

Ironically Foxconn uses iPads to survey their employees about work conditions. The complaints varied, but overall the biggest was low wages. At this point in the program Mr. Weir spoke with a Foxconn executive about the poor wages and working conditions. The executive noted that if Apple offered to pay the workers higher wages he would allow it, because it would increase the quality of his workers lives.

When Mr. Weir visited the villages of workers and interviewed their families, he found that they were living substantially better lives from the money they were receiving from their family members. At one point in the program, 3000 people lined up for a chance to work at Foxconn. The lines and mad rush were eerily similar to the launch day of an Apple product.

After viewing this program I can’t help but view my Apple products in a different light. Knowing that people are spending twelve hour days with low wages living in essentially a human labor camp makes me nauseous. Apple and other American technology companies who utilize Foxconn for development need to find a solution for the quality of work these people are being exposed to. One of the more obvious solutions is increasing the pay of the workforce. As a consumer I would be willing to pay more for my products in exchange for a better quality life for those creating them.

The Banality of “Don’t Be Evil”: Google Slapped With Class-Action Cookie Monster Suit