And I think Mark Zuckerberg is inviting all of the Valley over for a dance party on GOOG’s grave.

A few months ago, I published a piece on Tech.li about my purchase of seven shares of Google stock. Well, I figured that it’s only right to set the record straight: Google punched right through a protective trailing stop in July. I made money on the trade, and I’m rather contented by this.

What I’m less contented about is the rather disjointed product development cycle of the company. It has had its fair share of dud products, most of which Google had the mercy to lay to rest, but the company still props up a lot of stinkers. Okay, calling them “stinkers” is mean-spirited; they might have been well thought out, but Google never developed a user base for what could have been some amazing products.

As I’ve mentioned in another post, in many ways Google was ahead of its time, yet with respect to the much vaunted Social Media Revolution, the search giant was slow really slow — on the uptake.

Google may have been the smartest company in the Valley back in 2006. Now, there’s a dark cloud hanging over the Googleplex, and it gets denser with every interaction with the social web. That cloud, of course, is the Graph. Facebook is the rainmaker now.

A friend posted on another of my friend’s Timelines, “Can there be actual competition for market share for social media sites? Or are we going to see this pattern of Friendster born, grows, dies and Myspace grows, Myspace dying as Facebook grows? And if Google is so successful at everything else they do, will they be the next behemoth?” That Google hasn’t been successful at everything is irrelevant. His question is a valid one.

I replied that “The difference here is that Facebook is not another social networking site; the company is the backbone of the social web, and its new Open Graph API will allow developers to build more engaging applications. Myspace et al were cute. Facebook is the internet.”

Lukas Pleva, a web wunderkind and classmate of mine at UChicago, said in response, “Have to agree with Jason on this one. Pretty soon, EVERYTHING that’s online will interface with Facebook in one way or another… movies, online radio, video games, etc. It won’t be just a “portal”… anything that involves human interaction will go through Facebook. Google-wise, I honestly think that they just jumped on board too late.”

On this point, I think Lukas’ argument doesn’t go far enough to explain Google’s predicament. Where Google’s relationship to the Web was, and largely remains passive, Facebook is actively molding massive hunks of the internet around it. Apart from hosting individuated tools and services, Google never really had a unifying platform to tie everything together. And while Google has contributed immeasurably to the cause of open, easily accessible and usable data with projects like Scholar and Books, I believe the company realized too late that life online was moving away from the portal and onto the stream.

During Thursday’s keynote address at the f8 conference in San Francisco, Facebook founder Mark Zuckerberg unveiled a number of new updates and features to the almost eight year old platform. These were in addition to the updated Smart Lists and Subscriptions features rolled out over the past ten days. Facebook effectively removed the incentive to decamp to Google+ or Twitter.

Within a few days of Google+ being opened up to the public, Facebook unrolled Smart Lists — a rough equivalent of Google+’s defining feature: Circles. On Facebook, the UI is a little different; one can’t, for example, share posts with multiple lists with any kind of ease. This is problematic, at least for me, because I often want to reveal a post to two lists, like Hackers and Entrepreneurs, but I don’t want to make it public to all my friends, lest they discover that I’m a hopeless tech geek. And I mean hopeless.

Subscriptions function similar to Following on Twitter. The only meaningful difference between Facebook’s Subscriptions and Twitter’s Following features is that I can’t delete subscribers on Facebook. I’m the type of person who frequently expunges my Twitter follower queue of spambots and the like. I understand that I can always just change my privacy settings on Facebook if it gets bothersome, but I don’t like the idea of dragging along a crowd of subscribers for the rest of my Facebook-using life. It doesn’t appear one can “turn off” Subscriptions, either. 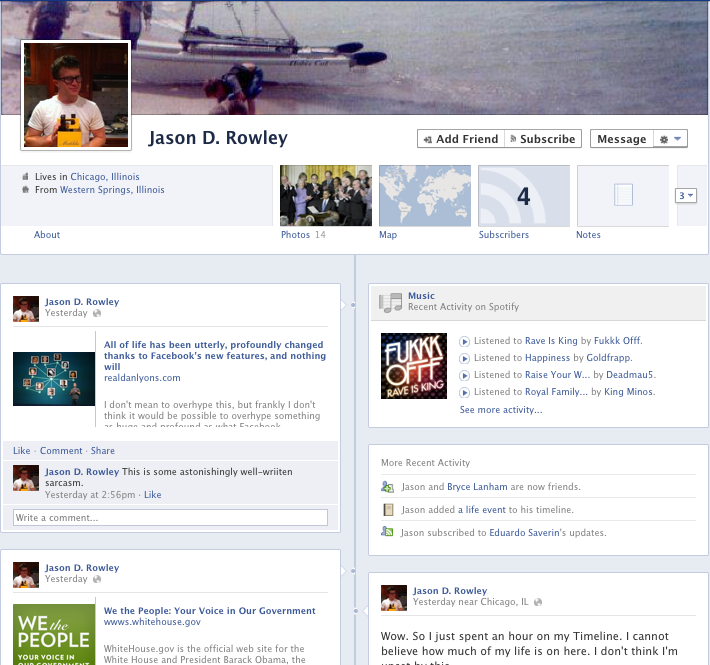 The Timeline, which will replace the current profile setup, is a wild and risky break from Profiles and deserves an article of its own. Timeline was released to developers after the keynote on Thursday. (For those readers who want to see what a Timeline looks like, you can check out my Facebook Timeline.) Timeline provides the infrastructure for users to develop a legitimate emotional connection with their social networking activities; sure, it’ll still be an exercise in hurling as much content onto the Feed/Timeline as possible, but now users will be able to access—to actually remember—the best of what sticks.

A developer friend Facebook chatted me as he first went through his Timeline. “I mean,” he said, “this [expletive] is nuts. I’m remembering so much. Like genuine memories. This is the first time in years I’ve been impressed by Facebook.” He continued, “Think of this though, Facebook starts to DEFINE what you did. For all intents and purposes, it’s kind of canonical. All these changes have made me want to go on a really large unfriending streak though. Just to kind of make things more realistic. Etc.”

Sympathizing, I noted that “I want FB to come up with a simple button: Friend -> Subscriber. Or follower. Or whatever it is they stole from twitter.” He responded enthusiastically: “YES. Just one click. Turn them off.”

The announcement which most rattled the f8 conference was the unveiling of the new Open Graph API, which will allow developers to integrate their social apps even deeper into the Facebook ecosystem, and allow them to harvest even richer data from the ever-expanding, increasingly dense Graph.

The company is expanding the number of gestures it offers its users; it’s way more than Likes now. Facebook is turning itself into a life-streaming service, placing less emphasis on sharing what you Like around the web and more on what you’re doing on the web. You don’t have to Like a movie to have Watched a movie; nor Like the music you Listened to; nor Like or agree with an article you’ve just Read. Facebook was not specific about when these new buttons will be released to web developers, but now many applications, including Spotify, and the Washington Post’s social reading app passively post updates on my activity.

Facebook is the platform on which we will write the narratives of our online lives. Google is not big on telling stories.

So, you might be saying to yourself, “Alright, you made your point. Facebook is beating the pants off of Google+, but this article’s title entails that Facebook is going to sink Google.” And it will.

The vast majority of Google’s revenues come from its online advertising business, which has managed to permeate seemingly every corner of the Internet. Well, Facebook makes the majority of its revenue from ads too. The web just ain’t big enough for the both of ‘em.

Where Google can only infer what people would buy, Facebook users just come right out and say what they want to buy, and they do so explicitly. Facebook just has better data than Google, and as the web becomes more and more social, Facebook’s data gets more valuable. That Facebook lets advertisers fine-tune and target their messages for different segments of a market using concrete, user-provided data is a boon to companies wanting to achieve maximum returns from an ad buy which often costs less than buying ads through Google.

Nobody has yet talked about the curious relationship between Microsoft and Facebook. Specifically, for all the Bing logos I see on Facebook—especially on maps — Bing is only just starting to integrate social signals into their ranking algorithms, and the Graph data they use is no more comprehensive than what Google gets from Facebook.

Given that Bing and Microsoft Online Services is losing the company a staggering $1B per quarter, I believe that Microsoft might get out of the search business, if it can’t stem the bleeding. This might sound like wild speculation, and it probably is, but I wouldn’t be surprised if Facebook launches a social search engine using all the indexed web content of Bing, augmented by Graph data. It boggles the mind to think about the implications of something like this.

Facebook serves over a trillion pageviews a month, or some 23,148 pageviews a minute. As of March of this year, Google processes about a trillion search queries per day. Google’s search business is not expanding; the company’s name is already synonymous with search. One could say that they’ve saturated that market too.

The real question Facebook-watchers have to ask themselves is, “Does Google pose an existential threat?” And the answer is No. Google watchers can’t say the same thing about Facebook. As Facebook continues to expand across the consumer-side web, Google will likely have to “pivot.” Google is the stodgy old IBM to Facebook’s bright, clean and consumer-oriented Apple. Facebook is the cool kid at the party.

And this I believe is what will ultimately cause the demise of Google as we know it today: it’s a cultural issue. Google might have a whole army of graduate-degreed computer scientists, but Facebook’s smaller development team have built a company over 60% Google’s size in under eight years. Facebook is the more developer-friendly company; and it doesn’t feel compelled to buy small innovative companies for absurd amounts of money, like Google does.

Zuck just gives them a seat at an ever-expanding buffet of data. As a startup guy myself, I can’t say anything other than “I Like this”. 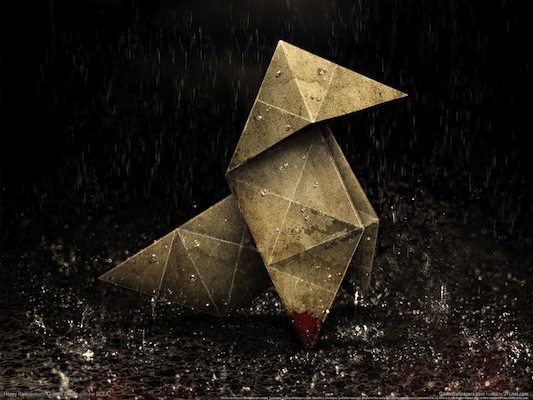 Heavy Rain with a Big Glass of Vodka