Location-based apps have become a popular tool for coordinating social life. Users log in to these apps to publish where they are, but this is not enough to give the full social picture of the venue.
SceneTap works to change this. Cole Harper had been working with Accenture for several years when he had the idea for Scenetap — a tool to find more precisely the sociability of a venue. The company was initially called Bartabber, but there was already a company with a similar name.
Harper’ vision was for a company that worked with more venues than only bars, so the name was changed.SceneTap has a full-time staff of fifteen, although it has many other contributors to the team. Many of these people work in the industry and set up communication between venues and SceneTap.  These workers approach venues with the team’s value proposition.
After the venue signs on, SceneTap brings its equipment to the venue.The venue has two devices installed when it works with SceneTap. The first is a people counter above the door. This allows SceneTap to look at people flow into the venue.
“The second device is more of a facial detection device,” Harper said. “It recognizes eyes, nose, and more to figure out what that person looks like.”
This data determines the demographics represented in the venue. 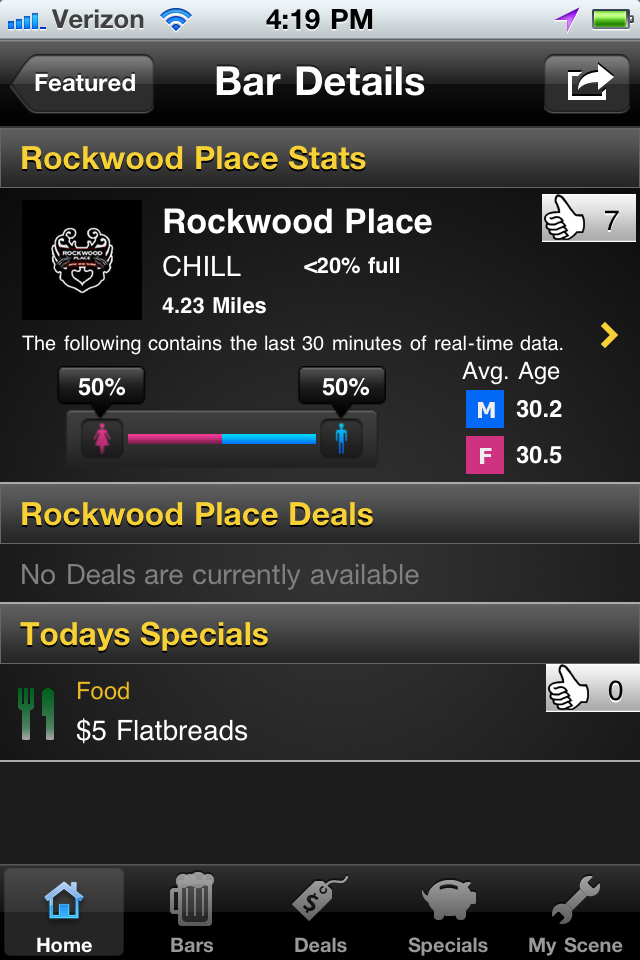 The concept of a facial detection device in a venue like a bar can set off privacy alarms. It is important to note that there is a difference between facial detection and facial recognition. A facial recognition device links with a database to identify a specific person. A facial detection device, like the ones SceneTap uses, has a broader focus. It only looks for gender and age specific features.
This is actually less invasive than a credit card, since no personal information is stored.SceneTap works for two user bases: socializers and venue owners. The app is available for iPhone or Android and is used to find the current sociability of the bar. This includes how filled the venue is and the current gender breakdown. Every venue also lists hours, directions and specials for the user.
“For the venue, this is more of a branding tool,” Harper said. “They are able to reach their target audience and also have a back end way to measure data stream and advertising to see who and why they are coming in.”
SceneTap has its system in over 300 venues right now.
Chicago is the primary market, but Austin, Boston, Los Angeles and Las Vegas are some of the networks where SceneTap is expanding. The key for SceneTap’s expansion is finding the correct venues to contact. “It is in our best interest to find the relevant network in each market,” Harper said. “It starts with the venue operator in order to make it a good tool to utilize.”The focus on the venues is what separates SceneTap from other location-based social networks, like Yelp or Foursquare. “We’re able to track a much larger user base,” Harper said. “We don’t rely on users to put in anything.”  SceneTap’s focus allows a greater level of information for the venues.

Venues have shown interest in SceneTap. Harper said that there have been offers to franchise the technology in new markets. SceneTap is aiming to build on their initial success as it keeps expanding. “It is like a field of dominoes and we’ve knocked through the first layer and if it falls correctly, it will compound incredibly.”