South Carolina-based company 3D Systems has begun taking preorders for the Cube, its new 3D printer. The printer was first unveiled at the Consumer Electronics Show earlier this year and aims to introduce simple, affordable 3D printing to consumers everywhere. 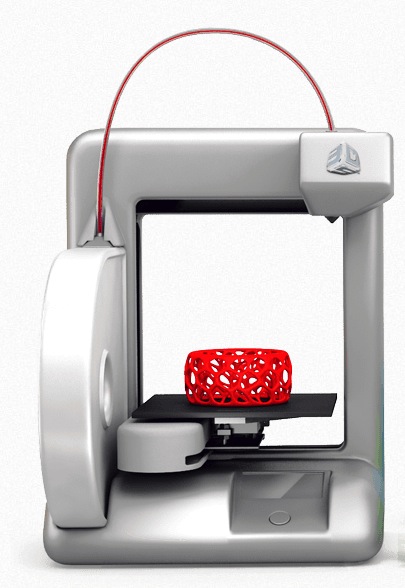 The compact 3D printer can create single color objects limited the machine’s 5.5 inch cubed printing space. Blueprints can be created with the provided computer and mobile software, and are loaded onto the printer through a local Wi-Fi connection. 3D Systems provides cartridges in ten bright colors, which can be bought individually for around $50 or at a discount in groups.

3D Systems has created a robust online community to go with its new 3D printer that will allow Cube users everywhere to sell their personal designs for immediate at-home production. Currently the website has everything from dog food bowls to iPhone cases and doorknobs. If a project is too big for your printer at home, 3D Systems offers a “cloud printing” service, where it will take your design, print it for you, and even ship it to your door. The community will also host user-created apps on that will allow printing enthusiasts to customize the models they’ve downloaded in new and interesting ways.

What makes the Cube 3D printer so accessible in particular is its (relatively) cheap price point of $1,299, which is significantly lower than many other 3D printers available today. Combined with the simplicity of the machine itself and the ability to share your own creations across a network of other 3D printer enthusiasts, it seems like the Cube has the greatest potential to break 3D printing outside of a geeky hobby.

I’ve written a few stories now about 3D printers, and so far Cubify sounds like the simplest, most affordable model out there. Just like the novelty of CD burners back in the early 2000s, user-friendly 3D printers like Cubify may usher in a new era of consumer creativity (and most likely copyright infringement).

The company began taking preorders for the Cube earlier this month, but so far the release date hasn’t been updated with anything more specific than Q1 of this year.