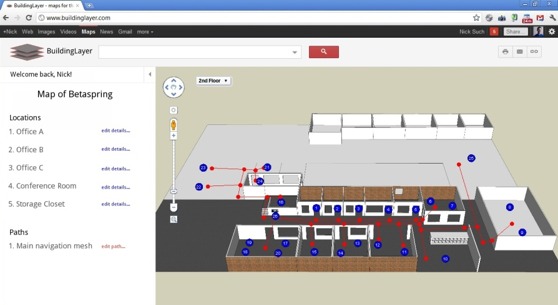 THE BACKSTORY: Nick Such has a background in mechanical engineering, and helped found Awesome Labs, and arm of Kentucky-based Awesome Inc. that helps students turn their engineering capstone projects into scalable companies. One product that came out of Awesome Labs was Awesome Touch, founded by the BuildingLayer team. Awesome Touch created maps on 46 inch touch screens for hotels and hospitals. BuildingLayer evolved from Awesome Touch as the team realized the need for indoor positioning tools. The team was a member of the Betaspring startup accelerator class of 2011, and received $20,000 in funding in exchange for a small percentage of the company.

BUSINESS MODEL: The team has sold touchscreen indoor navigation to hospitals, but right now the focus of the team is on R&D for their product BuildingLayer. CEO Nick Such envisions BuildingLayer tools being used for facilities management teams and for contextual mapping of private spaces. He noted that hospitals and universities often need to keep maps private due to HIPA regulations and secret research projects for example. BuildingLayer is in private beta, and the team is not actively seeking new customers (credit bythewood). “But if someone is willing to wade through our lengthy beta signup form, we’d be willing to work with them” notes Such.

COMPETITION: Indoor mapping is hot right now, with companies like Spotlight Mobile, Micello, and Google going after indoor mapping. Such noted that he is not concerned, since most companies in the space right now are B2C plays, while BuildingLayer is B2B.

COMING SOON: BuildingLayer CEO Nick Such will be speaking at SXSW Interactive next month at The Building Blocks for Indoor Navigation panel. The event will take place on Saturday, March 10 11:00AM -12:00PM at the Hilton Austin Downtown Salon J. If you are going to by at SXSW, this is a great way to learn more about Nick’s plans for BuildingLayer.

Charge Your Gadgets With A Creepy Cyborg Mask? (Spoiler: Probably Not)