Charge Your Gadgets With A Creepy Cyborg Mask? (Spoiler: Probably Not) 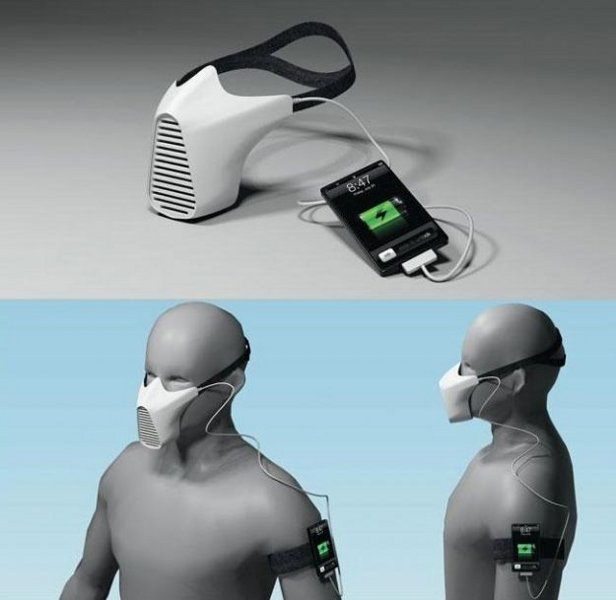 Electrical power — which, with contemporary technology, generally means batteries — is a perennial challenge for mobile technology. The AIRE mask is a design concept by JoÃ£o Paulo Lammoglia that would use a small turbine, powered by your respiration, to pump some juice back into your iPhone.

The device, which looks like it would be sold in another type of hardware store entirely, won a Red Dot award in the energy category. But don’t get too excited until you recall the last time you blew up an inflatable beach toy.

“It can be used while you sleep, walk, run, or read a book, for example,” Lammoglia wrote in a sunny statement that completely ignores issues of mechanical practicality. “Besides saving energy (and contributing to environmental preservation), it also encourages the practice of physical exercise. Its energy is available twenty-four hours a day, seven days a week.”

Lammoglia isn’t the only person interested in human-powered electronics. In October, researchers from the University of Wisconsin-Madison published on the possibility of using polyvinylidene fluoride strips to generate power for low-consumption medical devices from human breath.

It’s not clear whether the lungs could ever be practical to power technology on the scale of smartphones, as in Lammoglia’s concept — in fact, off the cuff, the notion seems dubious — but some engineers are interested in other ways that technology could harness the human body to generate electricity.

A 2004 paper (PDF) by Georgia Tech’s Thad Starner and MIT’s Joseph Paradiso considers the possibilities of siphoning excess energy from stored calories, body heat, respiration, gross motion and even blood pressure. Their conclusion? While human-powered devices are certainly worth researching, a breath-powered solution would probably cause stress and net low gains.

Due to the pesky first law of thermodynamics, there’s no such thing as a free lunch. So unless some basic physical laws are overturned, no biopower device is going to get you something for nothing. But devices that harness the same basic idea as pedaling a stationary bicycle to charge batteries appeal to anybody who regularly exercises anyway.

There has also been motion recently on alternative mobile power supplies that don’t turn users into cyborgs. Commentators have noted that Apple has filed a couple of patents for mobile hydrogen fuel cells — and while there are presumably tremendous technical and safety barriers between such a technology and the consumer market, the allure of an extended battery life is significant.