Anybots Lets You Work From Anywhere

Those of us who worry about robots stealing human jobs can rest easy (for now). Anybots’ virtual staffing robot allows a human to work as a robot doing a human job. It sounds a little complicated but Anybots Inc., a tech company founded in Mountain View, CA in 2001, has made the process very easy. Using a simple web browser application, a remote employee can operate a five foot tall, coat rack-looking robot that features cameras and a screen showing the operator’s face. The remote worker can see what the robot sees and freely move around the workspace, allowing them to effectively participate during the workday. The robot, named QB, doesn’t have any arms to manipulate objects, but it can still greet customers, scan documents, fax, and print, among other things. 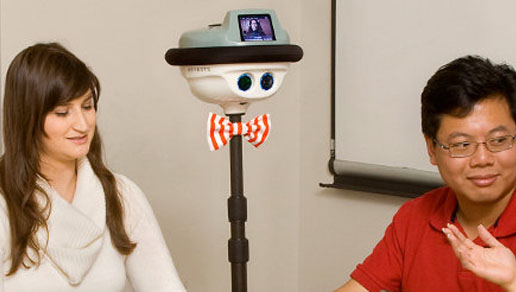 Currently the QB is best used as a receptionist or assistant, though the applications of the robot in the future are numerous. For instance, the robot could be used to get the help of remote specialists like doctors or inspectors, who, by having the freedom to control a camera at will, could provide feedback on a more detailed and personal level than by phone or webcam. It could even be an ideal, though rather expensive, tool for owners of multiple companies or chain stores to maintain a presence and oversee daily operations at various locations.

Anybots’ technology began shipping their robot at the beginning of this month and there are only 3 companies using Anybots’ robots. Judging by the team behind the new tech, which includes Trevor Blackwell, a founding partner of Y Combinator, we might be seeing these robots rolling around all kinds of offices in the near future.

If you’re looking for a robot friend for your own startup, the QB is now ready to order for a little over $10,000 (including shipping). If you’re just interested in checking out the tech you can give the robot a spin over at their website. Simply follow the link on their homepage,  install their browser update and you’ll be terrorizing the Anybots offices in no time.