The fictional technology in Star Trek has been rightfully used as the benchmark to which all to which modern-day technological advances should aspire. Automatic garage door openers are an impressive accomplishment, but in a science-fiction world of warp speed drivers and instantaneous teleportation, they are really nothing to brag about. The technology of our time may not allow for sci-fi applications like phasers (tasers don’t count!), but the increasing amount of technology squeezed into a handheld gadget is fast approaching near-Trekkian levels. 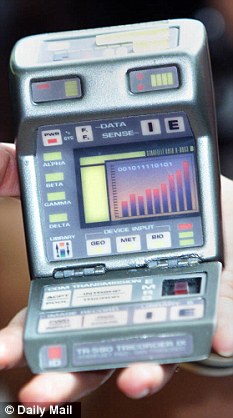 One example of this is seen in the recent advances in Terahertz wave (or T-ray) imaging, which is currently used in an increasing number of airport scanners. Because a T-ray has less photon energy than an X-ray, they pose a smaller risk to tissue and cell structure and are thus more attractive as an imaging option. Traditionally, T-rays required an immense amount of energy to create in controlled temperature environments, but researchers at the Agency for Science, Technology and Research (A*STAR) in Singapore, and Imperial College London have published a groundbreaking advancement which miniaturizes the size of a T-ray generator through use of a nano-antennae: a semi-conductor wafer and a pair of metal strips separated by 100-nanometer gap.

This design breakthrough is perhaps the first step to creating a fully functioning a Tricorder-like medical scanner allowing doctors to to scan a patient for tumors, internal bleeding, many other sorts of medical maladies. Although still in its early stages, the research from A*STAR and the ICL comes on the heels of the $10 million Tricorder X-Prize, announced at CES in Las Vegas, which will be given to the team that designs a practical, workable Tricorder scanner. In order to win, a prototype must weigh less than five pounds and be able to detect a set of at least 15 diseases, so A*STAR and ICL might have a bit of work ahead of them.

Whether the T-ray nano-antennae will win the X-Prize winning design remains to be seen but no matter what the outcome of the contest is, the real winners are those of us who are waiting on our phasers.

Anybots Lets You Work From Anywhere