Why you need to be Really Mad, Right Now, about Net Neutrality (1789 Style)

Being in Flyover Country is interesting. On the one hand there are some amazing people doing some amazing things. This was true of my time in Silicon Valley, of course, but everyone is in the industry there. You can’t swing a dead cat around without hitting some entrepreneur in the head with a startup idea to increase the utility of dead cats in rocket fuel production.

Here in Flyover Country we have two types of people. People like YOU- yes YOU- the ones checking this site because you are passionate about the digital space and want to change the world. You’re dynamic, smart and hopefully solving the world’s problems without adding to them by creating “Farmville II Electric Boogaloo” or some such.

Then there are our non-geek, non-early adopting, non-techie friends. You know who they are. They all discovered Facebook in 2008, just got texting on their phones in 2008, and finally realized that AOL is not the Internet in 2007. They are no less dynamic- they just aren’t Geeks.

To these folks the term “Net Neutrality” might as well mean the right for fisherman to choose any net they want to catch fish or crabs without being forced to choose one brand of net over the other. It is to them I address this post because right now anyone with an ounce of Geek cred is reading about the Devil’s Pact between Google and Verizon and is ready to storm Google H.Q. in Mountain View, erect Le Guillotine and start dispensing righteous fury against the Wired aristocracy “A Tale of Two Cities” style today. By chopping off Eric Schmidt’s head I presume.

So, my non-Geek friends, what does all this screaming about Net Neutrality mean? Why should you care? Allow me to explain thusly:

Pretend the fisherman I discussed earlier really did need new nets. And there were lots of nets to choose from, but one brand in particular, called “Evil Freedom Destroying Bastards NetCo, Inc.” really, REALLY wanted to make everyone use their brand of net. Let us also pretend that the fishermen had several routes to get their boats to sea but had to pass through some locks and channels to get there and the different locks and channels the boats sailed to sea through were all controlled by Verizon (I’m tired of making up fake company names).

Previously, all the fishermen paid the toll to get to sea to the company controlling the locks (Verizon) and all was well. But then one day a Verizon exec thought, “What if we let one crab boat through for every three fishing boats that got through? Those crab guys think they are all cool with their ‘Deadliest Catch’ show and all and my wife hates crab anyway.”

So they did it. The Salmon fishermen didn’t care, but the Crab guys did. I think the Crab guys’ ships were called names like “USS Napster” or “USS LimeWire” or something. Anyway, that’s another story.

Then Google- oops, I mean, “Evil Freedom Destroying Bastards NetCo, Inc.” came along to Verizon and said, “we really prefer when ALL fishermen (both crab and salmon) use our nets. We will pay you $500 Gajillion dollars to let only boats using our nets get through your channels and locks before the boats using other nets want to get through.”

Verizon took two seconds to think it over and said “Sure thing.” Immediately it caused chaos in the shipping lanes. You see, the fishermen still had to pay the fee to get to sea no matter what net they used. But now if they didn’t use EFDBN..er, Google they would have to wait at the back of a VERY long line of boats trying to get out and make a living all while paying the same amount the other boats did.

The fishermen were mad. They said, “Why shouldn’t we be able to choose whatever nets we want? We pay the fee to get to sea- this isn’t fair!”

Verizon stopped counting its money for a second, looked up with a smile and said, “Hey fishermen, Go F*ck yourselves.” 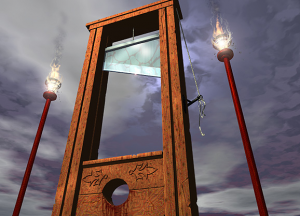 People got pretty mad and called their elected officials. So then Verizon and Google got together and said, “This looks bad. People are pissed but we all know we can buy off Congress.- if they don’t play ball we’ll back their opponent in the next election. Democrats, Republicans, they are all corrupt. Let’s make a deal.”

They next day Google and Verizon made a joint press announcement and said, “Okay fishermen, we hear you. From now on we will propose a new “Open Seas Act” to the government allowing open access to the sea no matter which net you use.”

When everyone started clapping, hooting and hollering Verizon and Google said under their breath when they didn’t think anyone was paying attention, “But when you use your CB to call land we are going F*ck you, and F*ck you hard. Because we bought Congress.”

RIGHT NOW Verizon and Google are actively lobbying the FCC to kill the wireless Internet as we know it. This isn’t the last decade when Google said their company slogan was “Do No Evil”. Now their slogan is, “Bow down to the Googleplex, peasants, and like it.”

To all you non-techies, maybe your Nana has a blog full of family photos you like to visit on your iPhone. Under the Verizon/Google Devil’s Pact when you try and access that site it is going to load extremely S L O W because Nana didn’t pay Verizon a Gajillion dollars to make her site load faster through AT&T’s wireless network.

“Wait? AT&T?”, you are thinking. “I thought you said Verizon?” Oh I did. But as it turns out AT&T has got their filthy paws all over this deal and can’t wait for it to go through.

While your iPhone battery drains and you can’t load Nana’s family blog, Verizon, AT&T and Google are laughing all the way to the bank.

Don’t let Nana and those Fishermen down. Contact Congress today and tell them to tell Google, Verizon and AT&T to go f*ck themselves and keep the Internet free and open for everybody whether or not they are doing a search on Google or looking at photos on Nana’s blog on their iPhone. The FCC is making a decision and they aren’t hearing from average folks like us but you can bet they are hearing plenty from the Titans on Industry looking to crush us under their boot heel.

Iâ€™ve been exploring and searching for a bit for any high-quality articles or blog posts on this sort of area . Exploring in Yahoo I at last stumbled upon this site. Wow, great, finally. Upon Reading this info So i am happy to convey and realize that I have a very good uncanny feeling I discovered just what I needed a lot. Thanks a lot. I most certainly will make sure to of course donâ€™t forget this site and give it a look on a constant basis to compare it with my industrial uninterruptible power supply websiteUnquestionably believe that which you said. Your favorite reason seemed to be on the web the easiest thing to be very well aware of. I say to you honestly, I definitely get irked while people think about worries that they plainly do not know about. Well,You managed to hit the nail upon the top of the hill as well as defined out the whole thing without having side effect , people can take a signal. Once again I say directly to you I Will likely be back to get more. Good Day