A copy of Valve’s newest employee handbook has surfaced this weekend in the Flamhaus‘ forums, detailing many core philosophies and unusual structuring of the greatly successful entertainment company. More surprisingly than anything the handbook wasn’t created to make sure employees follow Valve’s rules of operation, but to help new hires focus their creativity in a workspace of unprecedented freedom. Best of all the manual is filled with the same brand of absurdist humor that made the Portal games so compelling. 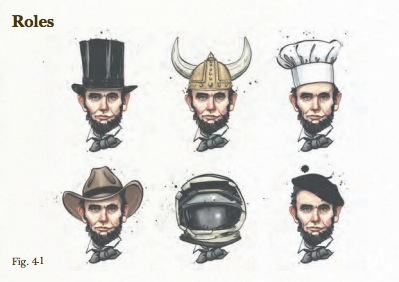 The handbook opens with a short message on how to best use the manual.

This book isn’t about fringe benefits or how to set up your workstation or where to find source code. Valve works in ways that might seem counterintuitive at first. This handbook is about the choices you’re going to be making and how to think about them. Mainly, it’s about how not to freak out now that you’re here.

From this opening message forward the entire manual focuses on the importance of creativity in its employees — an attribute which the company values over all else.

In the manual Valve largely credits its creative freedom to its complete ownership of both the company itself and all of its intellectual property. Complete ownership enables Valve to do whatever they want with their company, including their current “flat” hierarchical system in which there are no managers or bosses. Both the manual and a recent blog post by Valve employee Michael Abrash point to this structure as being vital to maximizing creative freedom.

When you’re an entertainment company that’s spent the last decade going out of its way to recruit the most intelligent, innovative, talented people on Earth, telling them to sit at a desk and do what they’re told obliterates 99 percent of their value. We want innovators, and that means maintaining an environment where they’ll flourish. 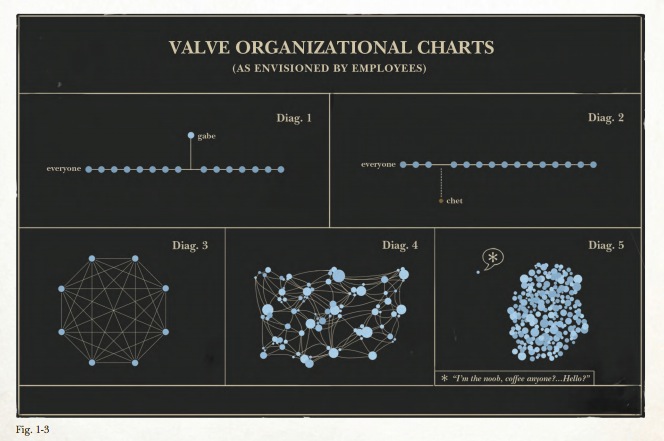 Valve’s founder and president Gabe Newell may be perceived as being the boss of the company, as the above diagram from the introductory handbook concedes, but the accompanying text in the manual points out that “even he isn’t your manager.”

Much of the handbook deeply emphasizes the fluidity of roles at the company. Everyone’s desk is on wheels so they have the freedom to move around the office wherever they like. Most of all this allows employees to work in a space together very easily, and change who they work with at any given time. The manual states that new employees will need to learn to be comfortable with the workspace fluidity and their constantly shifting roles.

You were not hired to fill a specific job description. You were hired to constantly be looking around for the most valuable work you could be doing. At the end of a project, you may end up well outside what you thought was your core area of expertise. 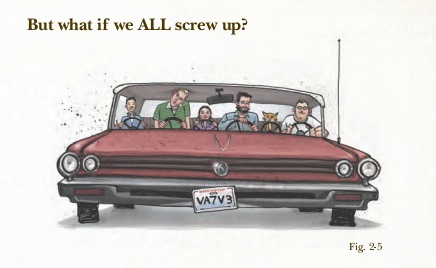 Valve’s unique hierarchy makes sure its employees feel free to take risks, to innovate, and, most important of all, make mistakes.

Providing the freedom to fail is an important trait of the company–we couldn’t expect so much of individuals if we also penalized people for errors. Even expensive mistakes, or ones which result in a very public failure, are genuinely looked at as opportunities to learn… Screwing up is a great way to find out that your assumptions were wrong or that your model of the world was a little bit off. As long as you update your model and move forward with a better picture, you’re doing it right.

Some final tidbits gleaned from the manual: Valve has on-site laundry, an office masseuse, and a gym; company bathrooms run a constant loop of awesome 80s rock; every year Valve takes all of their employees, along with their  family members, to a tropical destination for a weeklong vacation.

After spending some time going through the handbook it’s no wonder Valve’s profitability per employee exceeds Google, Amazon, and Microsoft. They’re all working in some kind of free-thinking, hippie developer utopia/heaven/dream world. Sign me up.

Tumblr On Ad Announcement: We’re Doing It For The Brands