Purdue University is working on a thermoelectric coating that will utilize the wasted heat energy given off by pipes and engines. The heat captured could potentially go back into powering connected devices, allowing engineers to harness the nearly 60 percent of energy wasted from heat emissions in the United States. 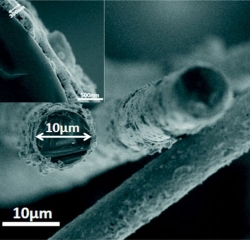 The coating creates an electric current when it’s heated on one side, causing electrons within the thermoelectric coating to move to the cooler side. Yue Wu, an assistant professor of chemical engineering at Purdue University, believes that recovering even 10 percent of wasted heat energy would have a large impact on industrial energy consumption.

The process was demonstrated at the university by creating waterflow through tubes coated with the thermoelectric material; a central tube contained a warm water flow, and within the outer tube ran cooler water. The difference in temperatures was created by the thermoelectric layer between them.

Purdue’s thermoelectric coating is created by dipping glass fibers in a nanocrystal solution of lead telluride. Once coated, the nanocrystals are fused to the glass fibers through a process called annealing, which occurs at a very high material-specific temperature.

The university’s process is a large step ahead of modern high-performance thermoelectric manufacturing, which require much more of the expensive material and tend to come out brittle. The new thermoelectric coating can easily be molded onto pipes or more complicated surfaces and uses only a fraction of the same materials, allowing them to be manufactured much more quickly and at a significantly lower cost than today’s standard.

This improved thermoelectric technology will not only allow engineers to create electricity with heat energy, but works in reverse to absorb heat when electricity is applied to the coating. Purdue researchers believe that by reversing the technology in the future self-cooling garments can be made with flexible thermoelectric coatings.

Researchers at Purdue are currently looking into improving the annealing process used when creating the thermoelectric coated fibers, allowing them to potentially increase their efficiency. Additional materials and an improved coating to prevent cracking of the fibers when shaped at more extreme angles are also being considered as they develop the new technology.

To achieve the goal of high-efficiency energy conversion as well as cost effectiveness, the current traditional TE materials are not satisfactory. New generation TE materials have to be developed to bring about foreseeable impacts.

To achieve the goal of high-efficiency energy conversion as well as cost effectiveness, the current traditional TE materials are not satisfactory. New generation TE materials have to be developed to bring about foreseeable impacts.