The 5 Wackiest Responses To Apple’s “Heatgate”

Apple is in hot water – heated, some critics might charge, with a latest-generation iPad – over the operating temperature of their new tablet. And while it may not actually run that hot (on par, even, with some Android tablets) it seems like everybody wants to sound off about the issue, pro or con. Maybe they have antennagate envy?

Here are some of the wackiest responses (intentionally and otherwise) that we’ve seen to “heatgate.”

While Consumer Reports pretty much kicked off the controversy with a report asserting that the new iPad runs some 13 degrees hotter than its predecessor, a widely-circulated infrared photo by Reuters showing an iPad 2 in cool shades of blue next to a fiery red new model didn’t help either.

That photo and similar ones may have provided the visual imagery necessary to turn a numerical critique into an emotional one, but BoingBoing’s Xeni Jardin pointed out what looks like a methodological flaw: the new iPad appears to be plugged into a power source, while the iPad 2 seems not to be. That could make a thermal difference, Jardin wrote, and promised to check in with Reuters for more details.

When we published this article, they still hadn’t gotten back to her. 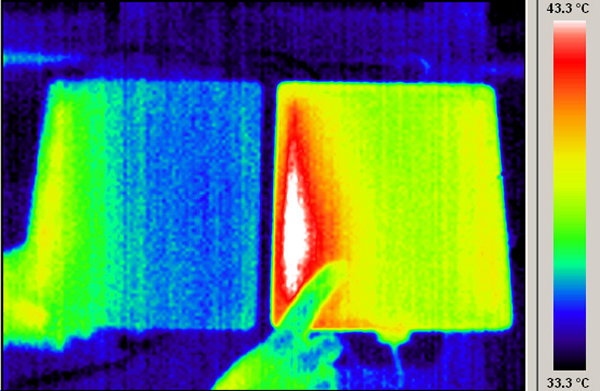 Consumer rights crusader and perennial presidential candidate Ralph Nader first rose to prominence by critiquing the auto industry, which he said was unconcerned with consumer safety. DigitalTrends‘ Rob Enderle invoked Nader’s seminal volume “Unsafe At Any Speed,” in an argument that Apple’s chilly response to the criticism (we’ll come back to that one) could come back to bite them if consumers are injured by the product.

While it seems like a bit of a stretch to compare a hypothetical boo-boo to what Nader saw as endemic disregard for driver wellbeing, the gaudy photoshop disaster used in the column suggests that DigitalTrends might not have been dead serious either.

It’s worth noting that, unlike the Ford Pinto, nobody is claiming that the iPad explodes following certain types of collisions.

PC World – which, mere days later, would bring some sanity to the debate with a battery of tests – lost no time in linking the iHysteria to, of all things, sperm count. And, hopefully in jest, tinfoil hats and the Illuminati.

“If you’re a male iPad user who likes to hold the tablet near your crotch while playing Infinity Blade for hours, it’s time to stop,” wrote Jeff Bertolucci. “Your future children will thank you.”

In addition to tone, Bertolucci might have missed a core issue of form factor. It’s difficult to imagine anybody without severely truncated thighs placing a tablet directly on their groin (rather than the knees, which provide a much better line of sight) without craning their neck uncomfortably.

In the undisputedly wittiest entry, Creative Coffee wrote a web app, HotPad, that facetiously promises to use the iPad’s thermal output to do something useful by keeping your coffee warm (when you run it, the page displays tongue-in-cheek code that claims to import libraries including “AllTheGrainsOfSand.h.”)

“Lay the new iPad on a flat surface and press Run to overclock your processor,” read the instructions. “When 100% is reached, place your coffee mug on the digital heat coils to keep it warm for hours and hours.”

The developers thoughtfully warn that while HotPad is unlikely to damage Apple hardware, spilled coffee might.

Late Apple figurehead Steve Jobs was known for sending strange, uncensored late night emails to individual customers. So maybe it shouldn’t be surprising that the company’s official response to heatgate is the PR equivalent of a snort of derision:

“The new iPad delivers a stunning Retina display, A5X chip, support for 4G LTE plus 10 hours of battery life, all while operating well within our thermal specifications,” reads a statement attributed to Apple spokesperson Trudy Muller. “If customers have any concerns they should contact AppleCare.”