Home > Blog > Tabula Casa: Zip Up Your Cables With This Neat-Freak Gadget 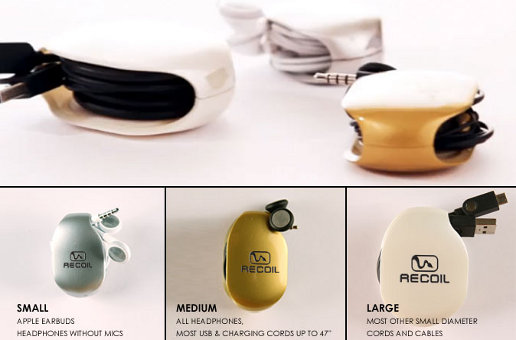 See those wires dripping off the back of your computer desk? David Alden wants to come into your house and tidy them up. Short of that, he hopes his Recoil Winder will help clean up some messy work surfaces.

The inspiration for the Recoil Winder came after Alden designed a home for his family in Park City, and was frustrated to realize after moving in that he hadn’t accounted for errant wires. The fishing reel-like Recoil Winder grabs headphone or cell cables and winds them up into a pocket-sized, spring-loaded mechanism–without, importantly, adding to the tangle more than necessary.

“Before we ever had drawings, I named the shape that I wanted the Blank Slate in an effort to encourage a clean, almost invisible design,” Alden wrote in an email message. “We are trying to clean up the tangles, almost to make them invisible, and clean smooth lines seemed the antithesis of tangles.”

But seriously, is this gadget only going to appeal to fastidious neat freaks? Actually, Alden suspects that crowd has already home-brewed fixes with rubber bands and twist ties. He hopes to fill a gap for people who don’t like spaghetti wires but don’t have the time or motivation to work out their own solution.

There have been various attempts at cable management, some involving Velcro, but Alden thinks that his spring-loaded design brings something new to the cable-covered table.

Most established products, he says, “require that you wind your cords around something, which puts a twist in your cable for every wrap you make. Twisting cables as you wrap is the quickest way to encourage tangling, so hand wrapping cables is a bad solution.”

I haven’t seen a Recoil Winder in action, but the company has released a promotional video:

Recoil Winders was financed by a Kickstarter campaign (pre-orders end this week) that had raised more than $110,000 by the time of publication. Alden credits the platform for pulling the project together quickly, and also with establishing an innovator-consumer rapport that he cherishes.

“People love [Kickstarter] because it gives them a glimpse into the minds of creative people and the creative process, but it also eliminates the timeless frustration that people feel about large faceless companies pushing inferior products into the market just because they can,” he wrote. “Everyone who orders a Recoil Winder on Kickstarter knows me. They know what I look like and what I sound like, they have my email address and they can send me a personal note.”