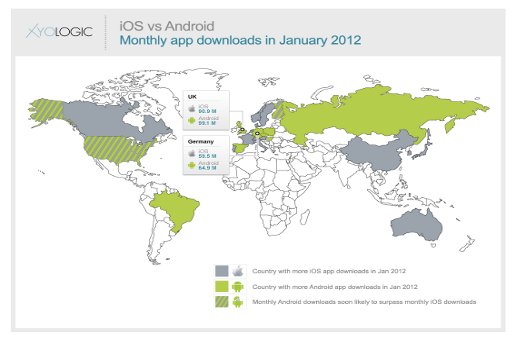 Android is poised to outstrip competitor operating system iOS in U.S. app downloads, according to data from mobile researcher Xyologic, in a trend that could change the dynamics of the smartphone wars.

In parts of Europe, users are already downloading more apps for Android than iOS, according to the analysis, and Google set to take the U.S. market in March or April. In many areas, researchers say, localization is pushing Android download gains.

“Russian Android users are even more interested in local apps and content,” wrote the researchers. “7 out of the top 20 downloaded apps were local apps. In fact ÐÐ½ÐµÐºÐ´Ð¾Ñ‚Ñ‹, a collection of jokes, was the No.1 most downloaded app with 414,000 downloads. Also Mind Games , ÐŸÐ¾Ð¼Ð½Ð¸Ñ‚ÑŒ Ð’ÑÑ‘ or Puzzles with Matches were particularly successful. 3,5M new apps were downloaded.”

Unlike iOS, which was developed by Apple to run exclusively on in-house smartphone and tablet hardware, Google’s Android is run on devices manufactured by a variety of companies. That gave Apple more control over the final iPad and iPhone product, but it’s let Android spread quickly in the competitive smartphone market.

Apple has consistently pushed apps, which are mobile applications that expand the functionality of the device, to the forefront of the iPhone and iPad experience–and until recently maintained a strong lead in that camp.

According to a previous Xyologic report, part of Android’s gains can be attributed to Google’s vigorous fight against shovelware.

“The picture would have been much different if Google had not started cleaning up the Android Market from low quality apps,” they wrote. “The monthly deletion rate has grown from 20% in November 2010 to 48% in July 2011. Each month more and more app publishers try to game Google’s app submission system and spam it with a lot of entries of what can only by considered junk apps.”

Exclusivity has meshed well with Apple’s image for a long time, with the company marketing the device as a stylish lifestyle tool for creative, artistic and individualistic consumers. Apple enthusiasts can also point to data from dating website OKCupid that suggests iPhone users also have more sex than people with Android or Blackberry phones.

There are already more Android phones in circulation than iPhones in the United States, according to Comscore, and the battle has heated up with Google’s increased emphasis on the operation system’s interface in Android 4.0, known as “Ice Cream Sandwich.” That’s in addition to rumors of a virtual reality-influenced device in development by Google, to be released this year, which will implement a version of Android on visual overlays using a chunky pair of high-tech glasses.