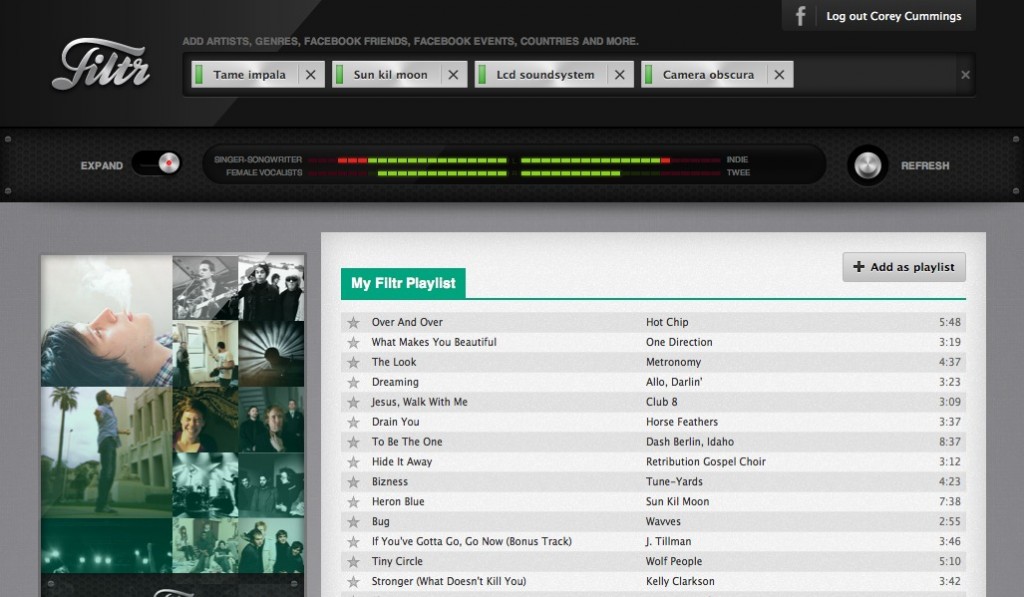 Cloud streaming music service Spotify introduced a new application this week that allows users to share and create new playlists by combining their own musical taste with those of their friends. The service, called Filtr, runs within Spotify’s desktop application and claims it will “get rid of the Spotify dictator at your next party.”

With Filtr the service hopes to better incorporate a mixture of everyone’s favorite music and help facilitate musical exploration within a social context. The application connects with your Facebook account and through its simple, all-inclusive search bar you can incorporate a variety of phrases to build a unique playlist. The search bar accepts band names, music genres, Facebook friend names, Facebook events, and even countries to create a custom-tailored playlist from any variable you throw at it.

Once the playlist is made it can be saved for later use within Spotify, or shared onto social networks like Twitter and Facebook for your friends to check out for themselves. The app seems to be most similar to popular radio service Pandora, which allows you to listen to stations based on specific artists you’re interested in. The added benefit of Spotify’s Filtr, of course, is that you can skip around quickly to any song you like, and additionally incorporate many variables into the search for new music.

Spotify introduced apps within their service late last year and since then the company says users have spent more than 1500 years using the various applications. This week the service doubled the number of apps available to their users to 22, and along with Filtr, new apps include libraries from Def Jam, Warner Sound, and a Hot or Not app, which allows users to vote which of two songs is better.

While experimenting with the Filtr I put in a group of some of my favorite bands, specifically Tame Impala, Sun Kil Moon, LCD Soundsystem, and Camera Obscura, and was given a playlist of fairly accurate indie rock recommendations like Wolf Parade and Grizzly Bear. I wasn’t able to get it to grab any information, however, on Facebook friends, most likely because many of them aren’t actively sharing with Spotify.

For some reason, amidst all the reasonable choices, a Kelly Clarkson outlier sat in the middle of the generated playlist. Maybe the app is sneaking in rogue tracks to help me branch out. I guess I can appreciate that.