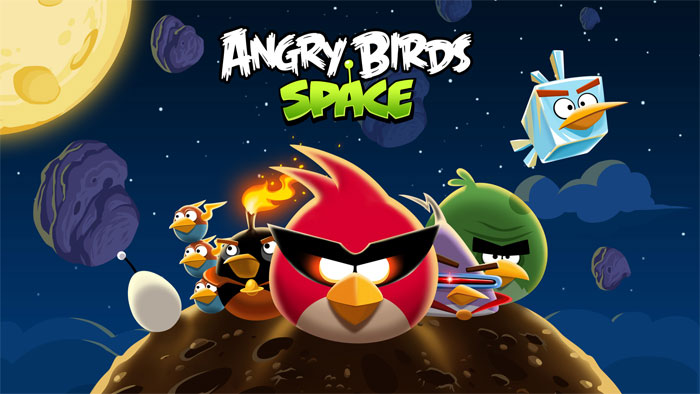 This week Finland-based developer Rovio launched its incredibly popular mobile franchise into space. Angry Birds Space sees the same cast of the angriest birds ever waging galactic warfare upon their egg-stealing pig rivals. The game was released on Thursday and  already has nearly 7,000 ratings, averaging at 4.5 out of 5 stars.

The most exciting new feature about the game is its revamped physics engine. The game utilizes atmosphere and gravity to create truly mind-bending puzzles. Whenever you launch an angry bird there’s now a line showing its initial trajectory. Each planet has a circle surrounding it, marking the range of its atmosphere and the area in which gravity will affect a launched bird. The line takes into account these atmospheric rings and displays how your bird’s trajectory will bend when entering the circle of the planet.

Some of the trickier puzzles involve hurdles, such as multiple planets in the path of your final goal, which curves your bird one way and then another before it hits its target. It’s an interesting take on Angry Birds’ well-worn physics gameplay, and manages to keep the game feeling fresh. For now there are only two worlds to play – each containing around 30 levels – along with a challenge pack that can be purchased for an additional dollar, but the developer plans to add more levels in the future.

Levels generally take place either on a singular planet with the evil pigs in or outside of its atmospheric bubble, or on a series of smaller planets, each of which fight for pull of your bird in flight. Some levels are completely out in open space without any gravity to hinder your soaring bird. Enemies are defeated by either being hit directly or if outside of the atmosphere, by popping their safety bubbles. The new space physics mechanics of the game allow for greater variety in level design, and after some of the longer rounds with the game I found myself feeling less fatigued in comparison to the original.

The game’s graphics aren’t much of a step up over the original; they’re still cartoony, though admittedly more animated and detailed than the original sprites. The cool space costumes are a nice touch and make things look different. The sound is also worth mentioning, as the game features a great ambient space-themed soundtrack that I much prefer over the goofy original, as well as appropriate space action sounds. The bird noises, however, are still a bit obnoxious at times, but seem to have toned down a bit.

If you’ve been following the series since the original, through Rio and Seasons, you’ll recognize all of the bird types present here. Aside from a few spacey makeovers, their functions are pretty much the same as they’ve always been. There is one all-new bird, however, that works like the bomb bird. Instead of exploding upon contact, it sends out a freezing charge affecting both blocks and pigs within range, rendering them easily breakable like glass.

To say that Angry Birds has been a successful franchise would be a serious understatement; to date the original title has been downloaded over 500 million times. With the massive success of Angry Birds and its spinoff titles, Rovio understandably has a lot of faith in their newest iteration. One of their ads has over six million views on YouTube and features astronaut Don Pettit demonstrating Angry Birds space physics on the International Space Station.

Angry Birds Space is out now on the Android Marketplace and Apple’s App Store. Like its previous installments, the new title is available in both a free and paid, ad-less version for $0.99.