What Ever Happened To The Space Elevator?

The 60’s brought us the first man on the moon, the 80’s grew by leaps and bounds in robotics, and the 90’s popularized the Internet. But what ever happened to the Space Elevator, every science fictionist’s fantasy, and a once promising venue to bring the masses to space? Is the Japanese company Obayashi Corp.’s bold claim that we will have our first running space elevator by 2050 a hyped up pipe dream or the real deal?

Techli sat down with the American scientist Dr. Brad Edwards, popularly known as the “Elevator man,” to speculate about the promise of a future Space Elevator. Edwards has been a key advocate and proponent in the push for an American Space Elevator for many years and is the president and founder of Carbon Designs Inc. which specializes in developing a safer and more affordable means of transporting space explorers. He received funding from NIAC in 2001 to write a paper proposing a way in which one could be built, and has also written two books about the technology.

According to Edwards, the Japanese project is more than a pipe dream. “They have all the social and technological assets to get the elevator built,” says Edwards. He cites Japan’s recent nuclear power issues and organizational changes as indicators that the dawn of a Space Elevator Age is ripe, with incentives of space solar power pushing for further development of the elevator.

What’s Holding Us Back? 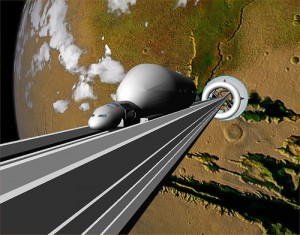 According to Edwards, the only things lacking are the social interest and will. “We have the technology within reach and the cost is minimal compared to many of our current endeavors,” he says. “The drawback is that as a society we have much stronger interests in television shows, entertainment,…space is not the top of our list.” And while there is still some technology development required, this can be done in the near future with the drive and funding. “You could build the elevator on the funds used in a fews days of any of our recent wars, the Big Dig in Boston, a small fraction of the bank bailout funds, a small fraction of Microsoft’s or Exxon’s cash-on-hand, or any of many others,” he says, adding that the advent of the Space Elevator age will also harbot political concerns. It will change the world and the one who controls Space Elevator access will be in an unprecedented position of power.

Why is it Relevant Today?

When asked why building a Space Elevator is so relevant today, when there are so many problems still left to solve on earth (mass starvation, energy crisis, to name a few), Edwards gave a compelling argument, stating that mankind’s descent into these problems are a harsh part of reality, but the the Space Elevator offers hope for the future. “The space elevator gives us access to abundant, clean power from space.  It gives us access to more room, It gives us endless resources.  These all help our current problems on Earth.  The building of the elevator may be a great benefit but diverting $10 billion from one of our wars, or from corporate cash holdings, or from … will not negatively reduce our ability or will to improve our situation on Earth.”

We have the science to make this happen. However with the unstable state of our planets citizens the security issues alone make it a non-starter!

@HeavygearDiver That certainly did not prevent humanity from inventing the nuclear bomb! 🙂 But I see your point…

@Irina Papuc
Yes Mam , I wish I was wrong. I love science and what it can do for humanity. But small brains run the world right now. Look forward to reading more of your work. If you ever get interested in Hyperbaric science or diving physics drop me a line.
Live long and prosper!

@Irina Papuc OOps , did not see your post. I was a diver in the navy and then a commercial diver/supervisor/College Instructor , you name it. Hyperbarics is mostly discussed in med tech classes as type 1 or type 2 decompression sickness symptoms and the recompression treatments performed. I have worked with Dr.Lambertson who was the father of our current diving treatment tables. I have always been a space geek and asked him off the cuff about the effects that astronauts might suffer during a suit failure.Diving physics is pretty simple to teach the basic gas laws of Boyle and Charles that we combine. I myself after 20 years of SatDiving ( Saturation of gas to tissue after 4 hours exposure at depth ) now suffer Dysbaricosteonecrosis at an advanced condition. Our industry learned by our fates about exposure to pressure periods. I used to spend 45 days at sat depth of over 600feet. That is constant exposure to 19ATA. If I was still teaching I would invite you to our physics course which you would find basic , but fun. I like to make the class fun as some of my Pupils are very hard headed.

I was just asking this exact question a week ago.  Great article.  We need more discussions about what is possible rather than why something won’t work.

@mtwomer Agreed!! If only we could pool 10$ billion together, this could become a reality. Hell, in fiscal year 2010, the US military defense budget was 683$ billion. The space elevator would cost 1.5% of that military budget!