California-based company Twin Creeks has developed a system to mass-produce the thinnest and least expensive solar panels on the market today. Using a new process whereby silicon sheets are embedded with hydrogen ions that separate them into thin layers, the company can create a more affordable flexible photovoltaic panel that uses far less material than the industry standard. 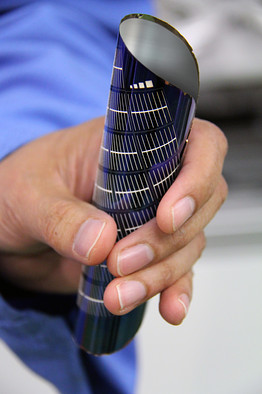 The embedded panels go into Twin Creek’s Ion 3 process, which looks like a sort of bank vault crossed with a washing machine, where many panels are compressed as the chamber spins at super high speeds. The heat from this process causes the embedded pockets of hydrogen ion to expand, and essentially carve a thin sheet of silicon from the a regular “donor” sheet. Twin Creeks claims to have been able to create 14 ultra-thin silicon sheets from just one standard silicon panel. The company created the system for manufacturers and its website claims that the Hyperion 3 is now available for shipment to factories.

The separating process is known as Proton Induced Exfoliation (or PIE) and allows the machine to create panels at a thickness of 20 microns. By comparison, standard solar wafers today are 200 microns thick, each one wasting the surplus valuable material that could be taken from it with this kind of production. Twin Creek’s website explains that these silicon panels create most of the cost for solar power systems. “Silicon, for instance, is still the most expensive component of a finished solar module and the single highest expense when it comes to generating solar power.”

By essentially multiplying the use of a single panel by ten, Twin Creek’s new technology is a huge step in making  solar power systems affordable for the average Joe. The company says that its Hyperion 3 system is capable of manufacturing over 1.5 million thin wafers per year, and would reduce panel prices to just 40 cents per watt, about half of what standard systems cost today.

The website says that solar panel technology is Twin Creeks’ first objective, though they plan to apply their new process to soon create cheaper and more efficient semiconductors like LEDs.