If you regularly find yourself feeling guilty after making a big purchase, one Atlanta startup has created a socially-conscious solution for you. Socialvest is eliminating the threat of buyer’s remorse by empowering shoppers to give back with each purchase they make. The startup lets users create an account that keeps track of online purchases made through participating retailers or credit card purchases at local stores affiliated with the program, banking a small percent of every qualifying purchase that shoppers can then give back to the charities they care about most.

Adam Ross, founder and CEO of Socialvest, was inspired to create a new way for shoppers to do more with their everyday purchases as far back as 2009, during a meeting with some of the world’s largest brands at a non-profit in Atlanta.

“I recognized an opportunity to change how they were giving back, and how consumers were engaging with brands because of their philanthropic efforts,” said Ross, who later decided that his new venture would focus on three key forces of interaction between brands and consumers: shopping, consumer consciousness, and social media. “The model allows consumers to buy the things they want and need, while simultaneously giving them a chance to support their favorite causes and inspiring their friends to join.”

Socialvest’s is similar to Toodalu, a Chicago-based charitable shopping startup. And while Toodalu works on the same principal, its donation service is limited to specifically registered stores within the Chicago area. Socialvest will allow you to accrue funds for donation directly from purchases made through major online retailers like Target, Amazon, and Home Depot, among many others. It’s up to retailers to decide what percentage of the purchase will go to the non-profit (anywhere between 1 and 15 percent), and Socialvest makes money by taking their own percentage on top of that for connecting the member.

According to Ross, Socialvest currently has over 600 retail partners, and with more than 1.5 million participating organizations to donate to, any avid shopper is likely to find a cause worth supporting. “Our average shopper shops two or more times a month with an average purchase of $65,” Ross said. “We are excited that these numbers are growing month over month and expect 2012 to be a strong year for us.” 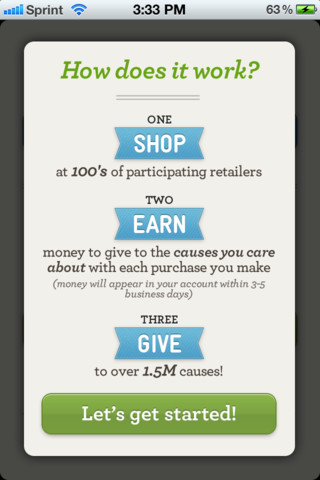 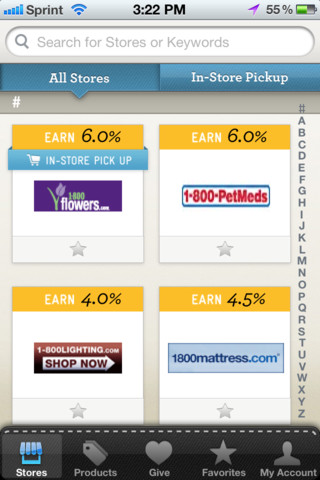 Socialvest launched in September of last year, after receiving a seed round of $1 million. Since then the company has released a browser app to inform users when they’re on a participating website, and a fully-featured iPhone app for socially conscious shopping on the go. The startup recently finished raising a bridge round, bringing its funding total to more than $2 million.

Ross admitted that Socialvest, similarly to other charity-focused startups, received a lot of “no’s” from investors in its early days. “The most successful startups have the ability to believe in themselves and what they’re trying to do and keep going,” he said. “Don’t be afraid of rejection and count on everything taking longer and costing more than you initially projected.”

With nearly a year of operation under its belt, Ross reflected that it has been the little moments that were most gratifying for the company. “I love getting feedback from someone who tries Socialvest for the first time, sees the money appear in their account and then gets to donate it to the cause of their choice” the CEO said. “The look on their face, or the sound of their voice, when they realize how simple it is to make a difference, is awesome.”

Check out Socialvest on the web or download the iOS app to start empowering your purchases; there’s really no reason not to give a healthy chunk of your next big shopping total to backing a good cause.