I love young startup founders. I admire them for not skipping school to drive around town or smoke behind the gym with a bunch of teenage delinquents like I did. These kids are doing something important. But recently a few young founders have stumbled in ways that make me wonder if young founders have the maturity to run growing businesses.

Take for example 19 year old Airy Labs founder Andrew Hsu who is described on his personal website as “a child prodigy, medical researcher and humanitarian”. He was also selected as a 2011 International Game Developers Association (IGDA) Scholar. But when his educational games company Airy Labs laid off most of its 20 person staff in early February, former employees came forward to Techcrunch to complain that his father and mother were really the ones running the show.

I’ve seen the immaturity of young founders first hand. Often, young founders are too obsessed with being a founder and going to networking events than they are about doing what it takes to build a business. Last year I had an experience that made me realize that business etiquette is an important part of the education of new entrepreneurs. An emerging entrepreneur from out of town called me to meet up when he was visiting NYC. He thought it would be valuable for me to give him a tour of my offices and show him what it was like to work in a startup after it gets acquired.

But then he canceled on me.

It wasn’t a nice cancellation. I know how busy things can get when you are rushing from meeting to meeting in a city. Instead of calling me, he blew me off and texted me hours after our scheduled meeting. Clearing my calendar for an hour with someone is a big deal when I’m busy grinding it out. He’s not a bad person and he’s eager to learn from mentors, but he just doesn’t have personal skills that entrepreneurs require if they want to be real business players. 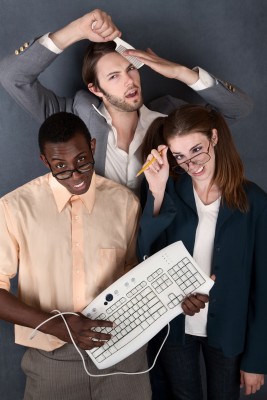 Thankfully, the MIT Student Activities Office is doing something about the lack of etiquette in nerd culture. Each year, for 19 years, the school has been hosting a day of mini workshops intended to teach the most brilliant minds in the world to interface with the rest of society. Some of the topics covered include:

Although some students feel that the socially inept nerd stereotype is harmful, the truth is that more startup founders are in need of socialization classes like MIT’s Charm school.

As the modern economy becomes more reliant on tech innovation, the business leaders of tomorrow are going to increasingly come from nerd culture. The current transition from snappy suit wearing CEOs to Adidas flipflop wearing CEOs has rubbed many in the business community the wrong way. Take for example Mark Zuckerberg’s disregard for the privacy of his early users, and the stain that it has had on his record regarding privacy as Facebook grows. Or take the recent Zynga earnings call, where Mark Pincus’s inappropriate behavior was the subject of the call. Although one could argue that their irreverence for authority and social norms is what made both Zuckerberg and Pincus great, behavior like this can divide companies as they grow in size and start hiring on traditional business types.

The problem is that the dominant startup business model of two nerdy hackers and an idea rarely works beyond the first stage of the company.

As startups grow, the most common major rift in companies led by nerd founders is the struggle between developers and marketing departments. Developers and marketers often go head to head during product development because their cultures are so drastically different. They have a hard time understanding each other’s behavior, which in turn can make it hard to work toward the same business goals.

Startup founders need to realize that being quirky in the echochamber of the startup community is fine, but it’s not appropriate in the larger business community. But where should socially challenged founders go to get a business etiquette 101 bootcamp if they aren’t MIT students?

The best opportunity for startup founders to be educated about the social norms of business is at the incubator level. With informal mentorship in product design, team building, and even pitch delivery, it wouldn’t be a stretch for incubators to offer a day of charm school similar to the MIT program.

Workshops in effective leadership, employee motivation, connecting with customers, and media training are all useful skills that startup founders must be adept in if they want to be global business leaders. Not everyone has an intelligent and articulate Sheryl Sandberg on their team to represent the company.

Do you think startup incubators should be teaching business social skills? I’d love to hear your opinion on this one.