Two years ago, I had my first interaction with a fairly unknown startup, named Sharethrough, that tossed a lofty promise my way: the ability to hoist my client’s branded content to “viral video” status. Like most cynical media buyers, I certainly had my doubts, but the opportunity was too good to pass up. Sure enough, the company followed through on their promise, placing my client’s video within AdAge’s Viral Video Chart for two months straight. It was then that I realized Sharethrough had built a unique, and somewhat revolutionary, niche for themselves in digital video distribution.

Of course, I still wasn’t completely convinced that gaining millions of video views equaled success for my client, as I suspected some “gaming of the system” was involved. Shortly after, I had moved on from my post as a day-to-day media buyer and, unfortunately, Sharethrough’s offering was no longer an area of focus. Fast forward to current day, when a brief sit-down with Sharethrough’s Director of Marketing, Chris Schreiber, helped me realize that the company never once rested on their laurels since our fleeting success together. As both online video and social media marketing has matured, it’s not about buying “virility” anymore; Sharethough’s success is found in what Chris calls, “guaranteed viewership and maximized social engagement.”

A typical challenge of any brand who’s managed to produce video content that goes above and beyond your standard 30 second ad, and happens to be genuinely entertaining, is distributed. Traditional means, if you pardon my use of that phrase to describe any facet of online marketing, of getting that video to consumers is extremely limited, as the most commonly used video executions, pre-roll and mid-roll, are too restrictive. All too often, your only hope is to “post and pray” within owned and operated sites and free distribution channels, i.e. YouTube. 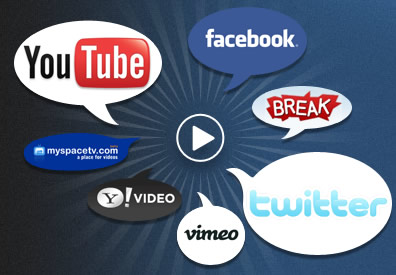 Enter Sharethrough, who, as Chris explains it, “is able to set up a content distribution network based around choice where consumers actually choose to watch your video.” They have “ built a technology platform that measures social engagement, whether it be shares, Facebook likes, Tweets, or YouTube comments, and optimizes against that data, driving as much social engagement as possible. A fundamentally different way of operating than most advertising companies have done in the past.”

And much to the chagrin of Sharethrough, still a small startup based out of San Fransisco with just a few remote employees in other metropolitan areas like Chicago and New York, brands have welcomed this new approach to digital video distribution. When asked how Sharethrough has managed to land some of the world’s biggest clients, like General Motors, Microsoft, Sony, and HP, Chris proudly mentioned that “we’ve had a bunch of great meetings and people have helped spread the word; we’ve been a sort of consultative partner to a lot of brands, offering valuable insights without even trying to market ourselves at all.”

One of the only startups selected to speak at this year’s Cannes Lions Festival, Sharethrough has certainly made its mark in an area that’s experiencing tremendous growth right now and advertisers aren’t the only ones noticing. At the end of last year, Sharethrough closed a $5M Series A round of funding led by North Bridge Ventures and Floodgate, adding to a previous $1M raised in angel funding from Ron Conway, Mike Maples, Baseline Ventures and other investors.

The future’s bright for Sharethrough who has truly defined a new video distribution platform for media agencies, creative shops, and their respective brands. I can tell Chris’ sincerity when he speaks about the company he’s happy to call home and the amazing group of people he works with on a daily basis. And, in all honesty, I too have drank the proverbial Kool-Aid. Best of luck to Chris and his team!