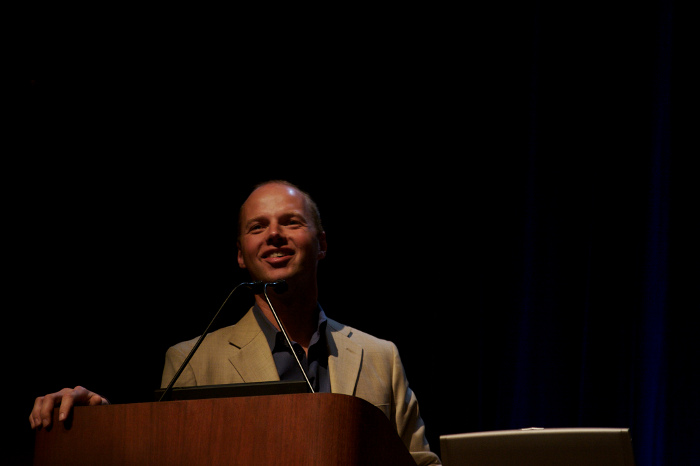 Sebastian Thrun keeps busy running Google‘s secretive Google X laboratory and with an academic post at Stanford. In his free time, though, he says he wants to revolutionize the way people approach education with Udacity, a non-Google-affiliated educational venture that offers online courses free of charge that he characterized as an “experiment.”

Udacity launched last year as an outgrowth of courses being offered for free by Stanford, and currently offers six courses in technical subjects ranging from math and physics to programming.

The idea, Thrun said during a question-and-answer session on Reddit, is to change the “pedagogical approach” in education by placing the emphasis on students solving problems themselves.

Thrun also praised the development of open source educational materials, and wondered out loud how advances in technology will affect the model of the textbook.

Udacity is just one of a growing number of notable, free open courseware platforms – many already well-received and some backed by prestigious institutions including MIT and Harvard. Thrun said that he would like to see both Coursera and Udacity succeed, though he implicitly contrasted Udacity with Khan Academy, another popular online learning service characterized by handwriting-style videos and voiceovers that Thrun has pinpointed as an influence, by noting that Udacity tries to minimize the length and emphasis on video clips.

“At Udacity, you will spend more time thinking on your own than listening to a professor,” he said. “I feel the online medium is so amazing, we should really go beyond the replication of the classroom experience.”

One participant asked whether Udacity will attempt to establish its own internal set of credentials or push toward becoming accepted mainstream, and if there were any plans to offer career services it its students. Thrun said the project is unlikely to replace sociological aspects of traditional higher ed, but that he’d like to see similar projects eventually influence those systems.

“Udacity is truly an experiment. I don’t think we can replace your network of your alma mater,” he said. “But on the positive end, we can add to this. My ultimate vision is that we should have universities that are affordable and that directly connect to employers. I feel most universities today do an okay job but not a great job. I feel most of the stuff I learned at college was pretty much disconnected to what I needed in my job; and there wasn’t a path to stay educated as I became older.”

Thrun also founded Google X, a mysterious laboratory run by the search giant that is reportedly looking into a number of highly speculative ventures including space elevators, advanced robotics and, most visibly (no pun intended) the company’s much-buzzed Project Glass headset.

Pressed by a current Stanford student on whether there is a place for walled gardens of information that is not publicly available, Thrun pushed for open access as an ideal.

“I think it would be bad to hold back knowledge from the world,” Thrun said. “This would run counter to what I think is good for society.”

3Degrees Founder To Bored Entrepreneurs: “Build A Spotify For Books”

HackRocket Kicks Off The Summer With iOS Development Bootcamp