The monthly #Rethink speaker series, hosted by Grind in NYC on the 2nd Tuesday every month, kicked off this week with “#Rethink Mutualism” featuring Freelancers Union Founder and Director Sara Horowitz. The event was also moderated by Ty Montague from co:. Roughly 75 fashionably scraggly Free Radicals, or Grindists if they are members of the coworking space, came together to hear what the leader of a seemingly incongruous movement to unionize the independent workforce had to say about their future outside the corporate cocoon. Mostly, it was a confirmation that this generation’s “quiet revolution” is getting organized to create institutional changes that make life easier for those choosing to live their professional lives one gig at a time.

Playing on the theme that there is an inherent lack of humanity associated with living, working, and eating out of pre-fabricated boxes, Sara suggests that the 165,000+ strong Freelancers Union membership is a testament to a shift in values that acknowledges the 1950’s-era American Dream is broken. Pictures of the drab Government Accountability Office and Department of Labor buildings reinforced statistics indicating the government is vastly under-estimating the economic power of what she purports to be 18% of the workforce constituted of talented consultants choosing to bill for their services on a per project basis rather than take what they are given as employees. While most union members initially join to utilize their insurance program, which addresses a core issue surrounding the government and corporations making independent employment a challenge, Sara sites the program’s cost-effectiveness as validation that collaborative working within for-profit cooperatives is the path out of our economic doldrums. 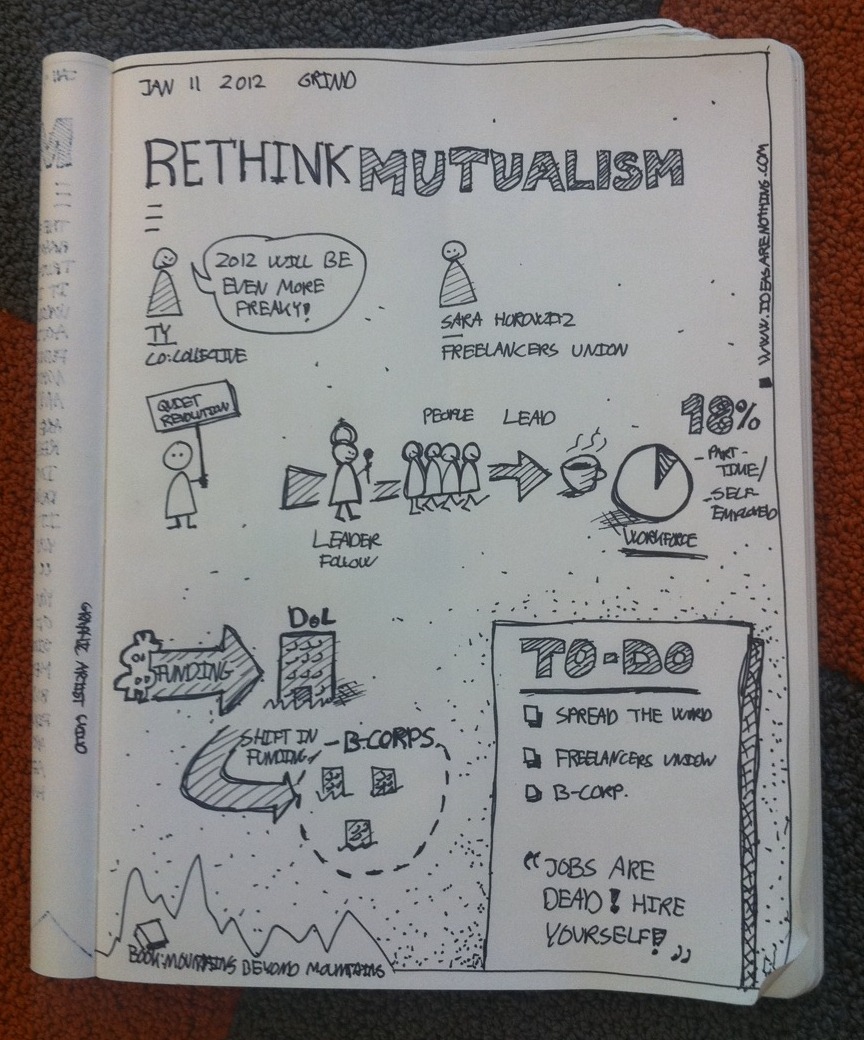 One interesting topic spurred by audience questions was Occupy Wall Street’s role as a training ground for future leaders to mobilize institutionally. Other well-received suggestions included that freelance workers should be armed with pre-tax accounts as cash reserves for lulls between gigs, and reaping the benefits of setting up your business as a B Corporation. All of this is thoughtfully depicted in the above image created by Mathias Vestergaard from Ideas Are Nothing, who happened to be doodling next to me and volunteered his work for this article.

As Tony Bacigalupo from New Work City summarized succinctly when the room was brainstorming for an elevator pitch explaining the independent workforce movement, “Jobs are dead. Hire yourself”. And I think Sara would add, “with benefits!”

Thanks for the mention. I continued working on the pitch for coworking after the session and came up with a dual punch idea.Â

First part is a quick punch referring to the fact that freelancers in coworking environments on average make 60% more than non-coworking freelancers. I read that somewhere. Don’t remember where… But something like that should at least buy you another 45 second to explain.Â

Second, I think the real argument for coworkingâ€“the single-minded-benefit if you willâ€“is coworkers! This might get another blank stare from the corporate guy who mostly hates his stupid office colleguaes. So we need to tap into the feelings. For me, going to work in a coworking space like grind is like going to work surrounded by amazing rock star people.Â
On a cold and rainy day in January, where work has piled up (and not the exciting work) it’s the rock stars that will get me out of bed and get up and face the day.Â

Hi Brian, Thanks for the write-up (I was sitting in the front row). I’d love to get a higher-res copy of the diagram you put up to show to the staff. Can you hit me up at dlavoie_at_ freelancersunion.org?