Restricted Diet? Nommunity Can Help You Become A Foodie

Striving to make it easier for those with restricted diets find the food they eat, Dallas-based Nommunity is about to enter a rite of passage for early-stage startups: pitching to investors.

As a member of the Tech Wildcatters startup accelerator class of Spring 2012, Nommunity is one of 10 new companies making a pitch during Pitch Day on July 11th at the Magnolia Theater in Uptown Dallas.

Over 300 backers, including VCs, angel investors, and companies seeking to acquire startups are expected to attend Pitch Day. Former attorney and Nommunity Co-founder J.J. Koch is looking forward to promoting the concept that he began working on in late-2010.  After becoming interested in CrossFit, and eventually a paleo diet, Koch struggled to find good comprehensive online dietary resources.

“After eating lunch at Whole Foods day after day, I figured that there’s got to be a good online resource for finding food and dining that met my dietary needs,” Koch said. After finding “terrible sites with no supporting data,” Koch, began dedicating his nights and weekends to compiling and, ultimately, sharing the data he found.

Currently in closed beta, Nommunity offers those with dietary needs, including halal, paleo, local, organic, gluten-free, vegan, kosher, and vegeterian, access to local maps highlighting restaurants and cold-case prepared options, along with the ability to share recipes, shopping tips, and reviews with others who share similar dietary concerns. 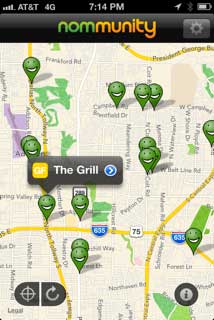 “More and more people are feeling better on diets with less processed foods, whether gluten-free, vegan, vegetarian, or any kind of specialized diet. We want to empower this consumer base, with 30 million people at its core, with the ability to make data-driven decisions about how to find the food they want to eat,” said Koch.

Koch applied to the Tech Wildcatters startup accelerator late last year at the suggestion of friend Alexander Muse, CEO of ShopSavvy. “He highly recommended applying for a spot in Tech Wildcatters,” Koch said. “This program is designed to help you launch your product rock-solid. We were up against thousands of applicants, only 30 of which got to make a pitch to get in. We were fortunate to be one of the 10 accepted for this year. The funding and mentorship they provided is key for us to be at the point we are ready to launch Nommunity.”

The Nommunity team is currently nine strong and looking forward to ramping up signups for its closed beta. It’s planning for an open beta in August, and aiming for robust development in early fall 2012, including an iOS app that will not only provide search options, but also allow subscribers to order food on the go. Rounding out its web presence, (including Facebook, and Twitter, natch) Nommunity has begun pinning recipes on Pinterest.

In the short term, Pitch Day in Dallas is just around the corner. “We’re hoping to team up with people who are as excited about our product as we are,” said Koch.

Will You Sign The Internet Declaration Of Freedom? [Infographic]