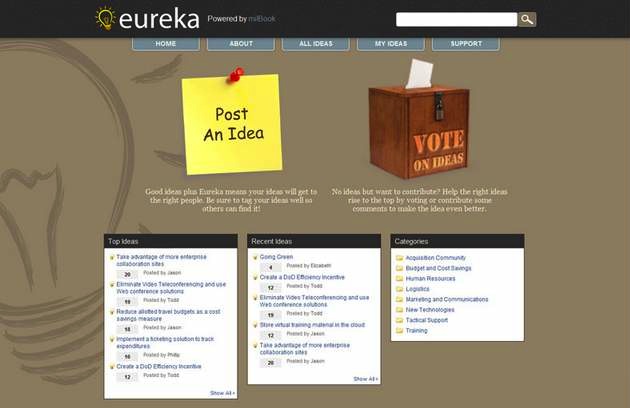 The military already has internal versions of many internet websites, including its own Wikipedia, YouTube, and Facebook. But according to Defense News, the U.S. Military will be launching an idea sharing service similar to Reddit sometime in July.

Instead of functioning as a linking resource with humorous pictures and videos, the military website will take on most of Reddit’s social forum features, focusing primarily on the voting system that allows users to decide what posts belong near the top of the front page in a democratic manner.

The service, called Eureka, will join the other social networking services within the Department of Defense’s internal network. Eureka has been designed to work as an open forum for military personnel to come up with suggestions for improving things like training, equipment, and operations. The service’s creators hope that the voting process will allow military personnel to come together on important ideas, and demonstrate to the higher-ups how much agreement there is for certain suggestions. The military estimates that out of 200,000 users currently using the social networking services, around 200 are within the top military ranks.

According to Defense News, some soldiers have already been using the military’s internal Wiki service to leave tips and feedback on particular areas of operation. In the near future, the military hopes to make introductory lessons to its internal network of social resources part of military school training.

The newest social addition to the military’s network is expected to launch sometime next month, and backers of the service hope that it will see widespread use within the military by the end of 2015.

Eureka is strikingly similar to a recent crowdsourced brainstorming project led by the U.S. Navy. The massively multiplayer online war game ran for two days and tasked participants to come up with innovative solutions to the impending energy crisis. An accompanying video asked players to imagine a future in which the military must prioritize its missions based on fuel consumption.