Shyp will pick up your package and mail it. Postmates will deliver food to your door. Drizzly will bring the booze. Plated is a different kind of delivery service. It delivers a primal cooking experience, and one that Josh Hix, a co-founder of Plated, says has helped marriages and relationships, and inspired people to be healthier by eating fewer processed foods.

It has gotten a big boost by being based in New York.

Mostly, I write about LA startups, because I like the complexity of the LA startup scene. It’s a never-ending journey, like the freeways. New York’s startup scene, I’ve always thought, is more of a grid like NY streets. New York’s startups are often centered around the financial world, or advertising. You’d think Plated would be an outlier in that environment, but not at all. 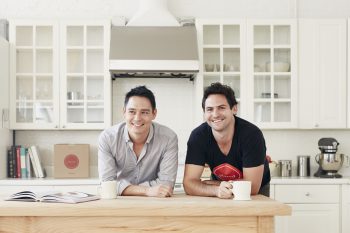 ‘I think it’s helpful to be in such a vibrant center of the culinary arts, a lot of creative people, and technology now. New York is a very deep technology community on its own,’ said co-founder Josh Hix in a recent interview with me. New York has that special blend of tech acumen, foodies, and a need for speed. The combination works for Plated.

‘We have a technology business. We also have a culinary business, and a service business. And all of those pieces are easier to staff in New York,’ said Josh.  He and his co-founder Nick Taranto have been able to assemble the right team of technical guys and chefs. ‘I’m not sure there’s anywhere else in the world that has that mixture,’ says Josh.

Plated has become popular because, according to research cited by Josh, 79 percent of Americans say they want to cook more at home. ‘They want to eat better, but huge amounts of calories are consumed from processed foods. So the secret sauce is really doing a high quality job of giving people what they want. And what they want is to cook more, to eat perishable, real foods. Not processed foods packed with preservatives, stuffed in a bag that would survive a nuclear winter.’ Plated delivers the real thing, and you cook it yourself. It delivers a ‘visceral experience of smelling the food cooking, being in the kitchen with loved ones,’ Josh said.

Angels and VCs often look to founders who have deep domain expertise, but in this case, neither founder was a great chef. But as a startup founder you eat a lot of take out, and then you start to get sick of it. Josh and Nick thought they could address that problem, and Plated was the result.

Although the company has raised $$56.4 million in funding since it was founded in 2012, with $35 million in a Series B round recently, Plated wasn’t an easy sell at first.  Josh said they pitched it 150 times before getting to yes. ‘So it really is just about persistence. There is no magic bullet, or if there is, let me know when you find it.’

The success of Plated speaks to a unifying quality of all successful startups: They grow up in a context, a community, and luckily for Plated, New York is one of those places where the formidable communities of food and tech meet.