You’re watching your favorite TV program, The Kardashians (but only because you loathe them so thoroughly), when one of them says that Barack Obama is, like, the sixtieth US president. You know that can’t be right. You reach for your smartphone, consult Wikipedia and breath a deep sigh of relief that your suspicions were valid, that the Kardashians continue to be wrong, and that all is right with the world.

If this scenario sounds familiar, you’re not alone. According to a recent study conducted by the Pew Internet and American Life Project, an increasing number of Americans are using their smartphones to supplement their TV viewing sessions. 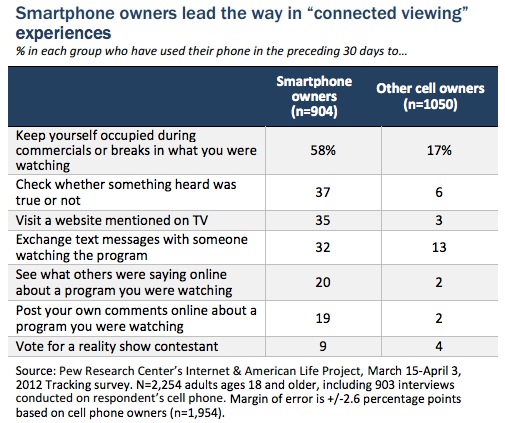 In a study titled “The Rise of the ‘Connected Viewer,” Pew found that more than half of adult cell phone owners in the US are using their devices as a second screen while watching their favorite programs. Television viewers were discovered to be using their cell phones to entertain themselves during commercials, check the veracity of statements made on television programs, communicate with friends about the content they were watching, and visit websites mentioned during commercials.

Smartphone owners, as distinguished in the study from general cell phone holders, were found to be “leading the way” as connected viewers. According to Pew, nearly 60 percent of smartphone owners were using their devices as distracting entertainment during both lulls in the program and commercials breaks. More than one third of smartphone owners were found to be using their devices as a screen for supplemental information to the program they were watching.

Big-name companies like Microsoft have already begun to recognize the potential for smartphones to enhance the entertainment experiences of television and movies. At this year’s E3, Microsoft announced a new platform called SmartGlass, which will allow content producers and game developers to create mobile applications that will enhance the viewer or gamer’s entertainment experience, providing extra information like character bios, world maps, and gameplay stats.

One early demonstration featured HBO’s fantasy hit Game of Thrones, where a tablet displayed information of where the show’s characters were currently located on a map of the fictional continent Westeros as the events played out in the program.

After looking at the Pew statistics it’s clear that television viewers are happy to dig for more information than what’s on the TV screen in front of them — for better or worse, a growing condition of the internet generation. Expect to see more and more services like SmartGlass popping up as tablets and smartphones continue to make their way into the hands of hungry viewers everywhere.

I am ashamed to admit that I can barely watch TV anymore without double screening, but I really do feel like it usually enhances my experience (and frequently gets me to watch something live that I’d otherwise stream later.)

@AdamBritten I’m all for it if it’s helping viewers get more out of the shows they like to watch. It’ll be interesting to see how content providers tap into this growing consumer behavior, like Microsoft has already begun to do with the development of SmartGlass.