Much ado is made about changing the ratio of women to men in computer science programs, but BlackGirlsCode is an organization that is taking the initiative one step further. BlackGirlsCode is helping to increase the number of young minority women in computer science programs by teaching girls between the ages of seven and 17 to code. The organization recently raised $21,000 on IndieGoGo to fund its Summer of Code program.

The Summer of Code workshops will take place in cities across the U.S including San Francisco, Oakland, Chicago, Detroit, St. Louis, Atlanta, Las Vegas, and Los Angeles from June to September. The workshops will serve between 200-300 girls and young women. Over 90 students attended the organization’s last workshop held on June 30th at DeVry University in downtown Oakland. The follow-up class in San Francisco sold out in one week, and the organization is seeing similar demand in Los Angeles, New York, Atlanta, and Detroit.

While there is a growing demand for the Summer of Code workshops, not all of the attendees have access to laptops and software programs to use while they are learning. That’s where the IndieGoGo campaign comes in. The $21,000 raised will be used to purchase equipment and provide scholarships for some of the girls. BlackGirlsCode is planning to buy 15 laptops to loan to workshop attendees. The remaining funds will send 20 girls to the organization’s Robotics Summer Camp in August, and pay for teacher/TA stipends.

BlackGirlsCode founder Kimberly Bryant is excited about the overwhelming response to the Summer of Code workshops, especially considering that her organization is only in its second year. Bryant’s passion stems from her own experience of feeling isolated in her computer science classes. According to research gathered by BlackGirlsCode, African American women make up 4.8 percent of graduate enrollment in computer science programs, while only 0.03 percent of female Hispanic freshmen intended to major in computer science in 2006. 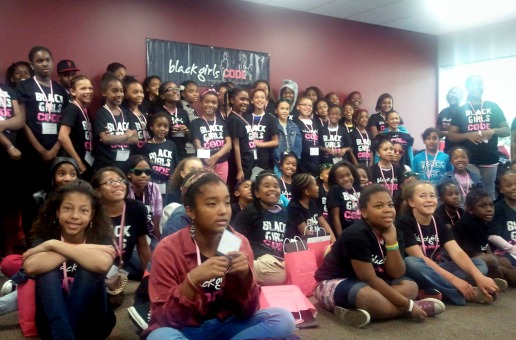 “One of my favorite quotes is from Douglas Rushkoff “Program or be programmed…”, as I think it speaks to the necessity for individuals to be involved in the tech revolution as creators. Our mission with BlackGirlsCode is to “change the ratio” of women of color in technology and that begins with introducing computer programming and STEM subjects to girls of all colors at an early age. We really want to change the face of technology and create the next generation of leaders and creators in tech and business,” notes Bryant.

Bryant said she receives an outpouring of gratitude in her inbox daily from the parents of the girls who attended the Oakland workshop in June. “I have parents who have contacted me from cities as far away from the bay area as Los Angeles who are planning weekend trips with groups of girls to attend a BlackGirlsCode class. I think that speaks to the great need we see,” continues Bryant. For more information about upcoming Summer of Code workshops and weeklong camps, go the the BlackGirlsCode events page.