iPad and iPhone users who want to access the internet under oppressive regimes, look up sensitive content, or who just care about privacy have a new tool at their disposal. The Onion Browser uses Tor (for “the onion router”), a worldwide network of volunteered servers that obscure the identity of internet users by layering levels of encryption – like an onion – to enable anonymous browsing on iOS. 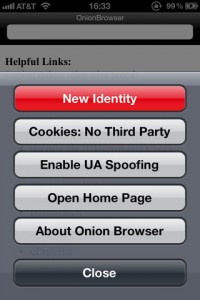 Developer Mike Tigas is self-effacing about the browser, which isn’t the first Tor-enabled browser in the app store, but which he believes provides critical features and stability not yet available elsewhere.

“What I ended up with is not the shiniest app and it is not the most fully-featured, third-party web browser for iOS,” he wrote. “But it’s quite stable, works for almost all manner of Tor-powered web browsing that I and others have tested, and provides a few basic niceties that other “anonymizing” iOS browsers do not.”

The app comes at a time when mobile telecoms have voiced opposition to legislation that would hold them accountable for turning over user data without a warrant. Tigas, who by day does web development work for a Spokane-area newspaper, warns users not to take privacy for granted, even when using TOR’s sophisticated anonymizing technology.

“Using Onion Browser does not inherently guarantee security or privacy,” he wrote. “It simply provides a set of features that may enhance privacy and anonymity while browsing the web.”

Tigas decided to sell Onion Browser for $0.99, rather than offering it for free, in an effort to make up for the cost of the iOS Developer Program. He plans to donate 10 percent of the proceeds from the app, which is the first iOS project he has seen to completion, to the TOR Project and the Electronic Frontier Foundation.

The browser is currently not available in France, but due to a pending import declaration rather than concern over its potential uses.

Tor gained some notoriety last year when it was used by Silk Road, a site that has come under scrutiny for acting as an Amazon-style marketplace for the sale of illicit drugs. Organizations including the Electronic Frontier have voiced support for Tor as a method for whistleblowers and dissidents to retain anonymity.

Google Actually Sells Something – And It’s Sketchup, To Trimble