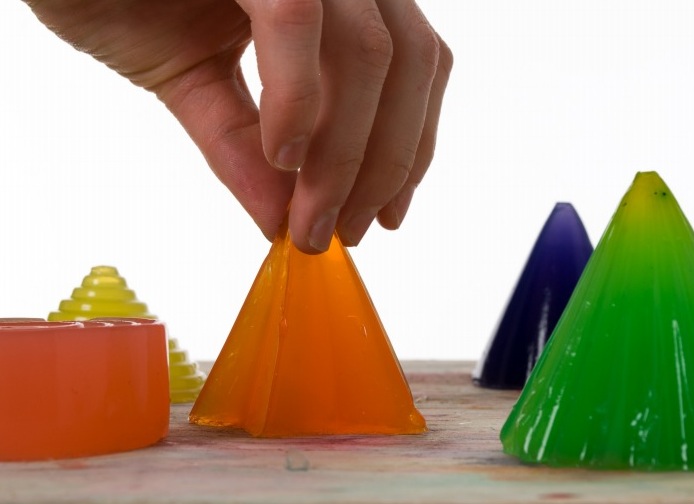 Two students at ENSCI – Les Ateliers, a school for creative and industrial design in Paris, have created what is essentially musical JELL-O. Their project, titled Noisy Jelly, allows anyone to mold their own gelatin shapes which create different sounds depending upon where they’re touched. The project was created by French-born students Marianne Cauvard and RaphaÃ«l Pluvinage, who are completing their last year at the design school.

The gelatin shapes don’t emit any sound themselves, but instead work through a computer sound processor. The gelatins can be specially designed, not just in terms of shape, but composition that will affect their sound output. The shapes can be made by mixing water with different salt concentrations, which the students labeled and colored in different varieties. According to the labels in the video, the different concentrations have affects on the melodies: bass, “scratch,” and sound of each jelly.

The kit comes with pre-made plastic molds in cone and “energy dome” designs, a shape more popularly recognized as the “Whip It” Divo hat. After about ten minutes the shapes are ready to be placed onto a board made of a thin wood sheet and metal foil – a surface which acts primarily as a conductor. Differences in sound occur due to both the salt concentration of the particular jelly and the distance at which the node is activated. A signal from each shape is sent to a computer to process the sound, passing through a modified Arduino board acting as a capacitive sensor on the way.

Pluvinage has some other interesting projects showcased on his Vimeo account. One project utilizes an iPhone’s camera to read patterns on paper and create corresponding sounds as it moves. Another similar project mirrors air travel by recognizing landscape patterns across a strip of paper in the background, and animates altitude on-screen based on the plane’s height above the paper. It’s unclear if it’s actually a kind of game or just a concept, but it seems pretty interesting. Pluvinage even has a video of a speaker he constructed, equipped with touch sensitive volume controls and housed in papier-mÃ¢chÃ©.

After watching the video above, Noisy Jelly certainly looks like a great deal of fun. If the kit ever becomes commercially available I already plan to use it exclusively as an alert system to warn me whenever someone’s got their mitts on my delicious JELL-O.