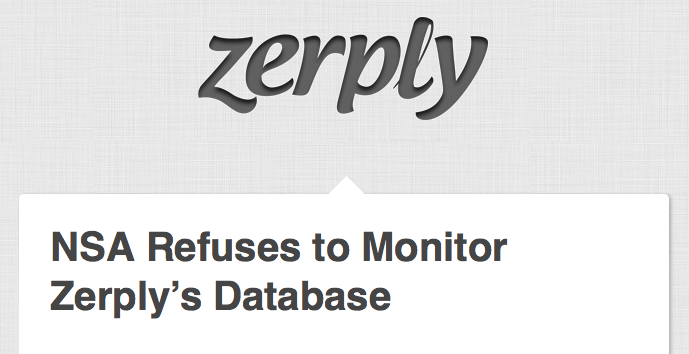 Most young companies strive to gain greater exposure. In the past, companies had to spend money to reach the masses or convince a reporter they were worthy of a story.

The Internet, with social media specifically, has completely disrupted this model. The barrier to exposure has drastically decreased, and the power has shifted to the content creator.

Individuals spend hours, if not days, strategizing how to create viral content. Should it be funny, super serious, or over-the-top polarizing?

No secret recipe exists. Viral content is a special mix of value and content. A recent popular strategy has been “newsjacking,” or leveraging breaking news for promotional gain. Immediately following a scandal there is an opportune time to gain additional exposure and eyeballs. The reward goes to the most creative organizations.

The Zerply team, for example, made a decision on June 10th to have Adam Winn write a blog post titled, “NSA Refuses To Monitor Zerply’s Database.” The sarcastic narrative argues why it is unfair the NSA won’t monitor companies equally.

“My goal was to make someone think it was funny enough to share it with their friends,” Winn said. The post was written in hopes of connecting with an audience. “I wrote it and rewrote it a few times over the course of the day to optimize it for comedic effect. As an afterthought, one of our developers, Josef, said, ‘Put a link back to Zerply at the very least.’ So we threw one on the end.”

“I don’t want to brag, but the guys at Zerply are some of the funniest people you’ll ever meet,” he said. “Combine that kind of competitive humor with being really interested in tech and you have a recipe for lots of nerdy jokes. This just happens to be one of the times where we thought the wider public might have considered one of our jokes worth reading.”

Zerply and Winn aren’t the only ones to take advantage of the NSA’s PRISM scandal. Emiland De Cubber is a freelance presentation designer who also jumped on the newsjacking bandwagon.

De Cubber couldn’t help himself after having his eyes scarred by the hideous NSA slides that were released. He went to work creating beautiful visualizations of the same content.

This led to approximately 600,000 views on Slideshare. Websites such as Fast Company, TechCrunch, Huffington Post, Gizmodo and Mashable have all picked up his slides, something he said he has always dreamed of. He has gained more than 350 followers, which is more than 40 percent greater than his previous following base. “More importantly, I have received many incredible leads for my business,” De Cubber said.

Not bad for a little bit of effort. This strategy becomes necessary when individuals and organizations have a tight marketing budget. “As a freelancer, I don’t have any marketing budget,” De Cubber said, when asked about his goal in creating the slide-deck.

“A great way to showcase your work is to create something entertaining or useful, try to promote it on social media platforms, and cross your fingers. I was not thinking that it would reach more than 600k views. It just wanted to do it for fun at the beginning, but now I’m very happy with the results.”

Expect to see more newsjacking in the future as barriers to exposure have been lifted, and the power lies within the ability to be creative.

About the Author: Anthony Pompliano 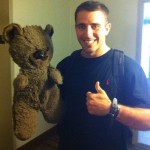 Anthony Pompliano is a military vet turned tech entrepreneur. He currently is Founder and CEO of DigaForce, a social intelligence company specializing in audience measurement. You can follow him @APompliano.