NASA will soon launch a Deep Space Atomic Clock (DSAC), which will help spacecraft better orient themselves during missions. The clock will launch into space onboard a satellite, spending about a year orbiting the planet as NASA tests its effectiveness. 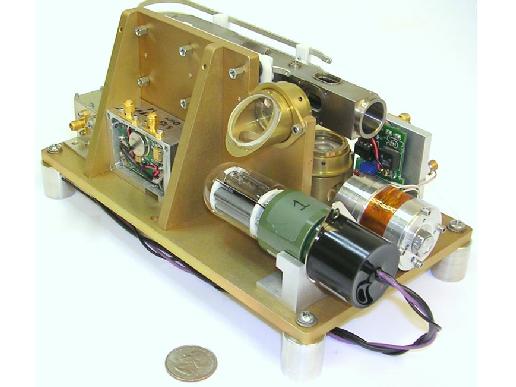 The DSAC next to a quarter for scale.

NASA’s DSAC will allow astronauts to conduct relational calculations independent of ground control using direct communication between the satellite and an onboard system. The clock will relay this crucial information in real time, allowing astronauts to more easily carry out time sensitive tasks.

The technology works similarly to GPS satellites, which contain onboard clocks of their own to allow ground positioning and direction to be calculated based on time delay as the signal is sent.

The space clock is a large improvement over NASA’s current two-way communication system, in which space vehicles have to contact the ground and wait for a response – a delay that can often be too great for crucially timed operations. NASA hopes the DSAC will be much more reliable than the current system, with the clock shifting by, at most, one nanosecond every ten days.

Additionally, NASA’s space clock is a much more cost-effective alternative to revamping the network of ground antennas that are currently used for communication. In a press release Todd Ely, principal investigator of the DSAC, highlighted the more specific advantages of the new space clock.

Adopting DSAC on future NASA missions will increase navigation and radio science data quantity by two to three times, improve data quality by up to 10 times and reduce mission costs by shifting toward a more flexible and extensible one-way radio navigation architecture.

Astronaut Ron Garan recently participated in a kind of Q&A session on reddit, where he spoke about deep space travel as being vital to our survival. The astronaut, who had just returned from a six month stay on the International Space Station, stated that he would be willing to undergo the long and rigorous process of traveling distant planets “because it is important for our future.”

None of the first clocks survived from 13th century Europe, but various mentions in church records reveal some of the early history of the clock.