Are you fascinated by the simple beauty of perfectly symmetrical images? Do you wish there was an Instagram app filled with nothing but Rorschach blotch photo edits of everyday life? A new iOS app has emerged from a collaboration between Chicago startup StageBloc and The Glitch Mob, an LA-based 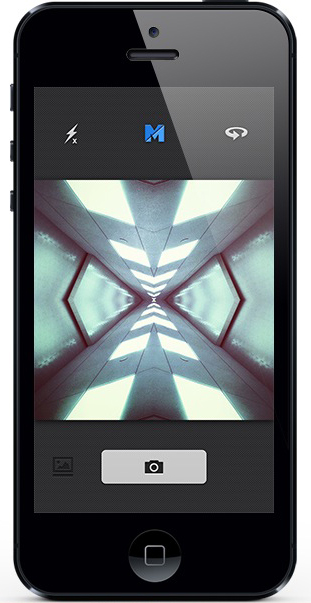 electronic group, that allows users to create and share their very own kaleidoscopic photo creations. Mirrorgram, which launched late last week, has already broken into the Apple App Stores top 10 paid apps over the weekend.

The app’s social functions largely mirror those of the popular mobile photo sharing network Instagram, though Mirrorgram, as you might have guessed, deals exclusively in creating elegantly mirrored images. Like Instagram, the app features an array of filters to accompany your newly created photo, as well as the basic social network sharing options once you’ve manipulated the photo to your liking.

As demonstrated in the video below, the function of the app is pretty straightforward. Users can open up the camera and tap the center ‘M’ button to browse through a series of mirrored filters, watching the live preview to line up their shot to make the symmetry as interesting as possible. Luckily, the mirroring effect can be further manipulated and perfected even after the picture has been snapped.

“We knew we had stumbled onto something when we found ourselves walking around like zombies with our eyes glued to the live, mirrored preview on our phones,” said co-founder Tom Giles. “When we saw our friends spending hours laughing with delight at the images they were creating… we kept being amazed at the things we could create with such a simple setup.”

Mirrorgram is integrated with StageBloc’s SDK, which enables users to maintain an online presence and monetize their creative content — not only images, but audio and video as well. Giles founded StageBloc with Greg Ipp and Josh Holat in Chicago in 2011.

The simple photo mirroring app is currently available for only $0.99 on the App Store. According to the Mirrorgram Twitter account, there will be more news about an Android version of the app in the near future.