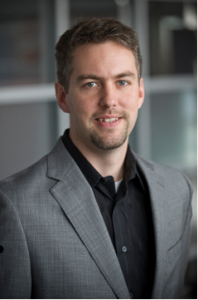 Last night Bernhard Kappe of Pathfinder Development hosted a Lean Startup event in the office of the Illinois Technology Alliance.

Kappe is the Chicago organizer of the Lean Startup Circle, a group that, “helps entrepreneurs build a successful startup by learning from the experience of other lean startups.” Chicago’s Lean Startup group went from 9th in the world in size to 4th in two months. Their goal is to knock out NYC and Boston from the #2 and #3 spots and in 2011 bump San Francisco from the #1 spot, to which I say, “HOOAH!!”

The place was packed as everyone had come to hear Mike Evans, the cofounder of Chicago startup success Grubhub. Grubhub is the #1 online portal to let you know where you can order food from in your neighborhood (and actually have it delivered too!) Urban eaters everywhere rejoiced and Grubhub is now in 13 cities with more, the site says, “in the oven.”

Mike was addressing the crowd on his 4 Steps to Success to build out a successful startup and it was a great speech. It was also simple, but the best things usually are. It reminded me of the now infamous South Park episode where Underwear Gnomes steal the towns underwear and then are asked why they do it. Step 1 is Steal Underpants and Step 3 is profit. But they don’t have Step Two.

Thankfully Mike had all four steps to share and he introduced us by discussing the same thing that drives all entrepreneurs (other than wanting to buy a Tesla, of course): escape working for the man and fix a problem.

For Mike, that problem was the fact that in the dark ages of 2004 there wasn’t a good way to find out who delivered what types of food to a person’s neighborhood. One cold Chicago winter’s day while he was packed into the 151 Bus (been there, done that) and his face was pressed into some other dude’s armpit he decided, “Damnit, I am going to code that site!”

Fast forward to 2010 where Grubhub is wildly successful and Mike is discussing his 4 steps to success. He decided to make the crowd wait for #1 but started instead with

There was some discussion of B-School buzzwords like “Minimum Viable Product” but the main thrust was “if you can’t make even one dollar, maybe you don’t have the right idea.” I looked around the room and could tell I know I wasn’t the only entrepreneur in the room thinking to themselves, “Okay, I made a buck….barely. Now what?”

One of those two dollars is preferably from the person that paid you the first dollar. “This makes sense,” said Mike, “because if you can’t ever convince a certain percentages of your customers to be repeat customers, maybe you are in the wrong business.”

Everyone laughed at this of course, but entrepreneurs are funny creatures. Even though we all laughed at this line, it was also a nervous laugh that said, “Pretend like you’re a big deal and make everyone think you have a hot startup even though you can’t pay rent next month.”

Basically Step 4 meant hiring the smartest people you can that believe in what you are doing and can do parts of the job better than you can. If your skill set is in engineering and coding, hire a sales person. If you are a sales person, hire a tech guy. Decide when it makes sense to pay a salary to grow the company profits faster than you can alone.

Finally, Mike circled back to step 1 and this one hit home for me. He wrote in capital letters on the white board:

“If you still have a day job,” said Mike, “you are not totally motivated to make the first dollar in Step #2.” He went on, “getting fired doesn’t count. If you are looking for a job, that is your job. You need to be totally committed.”

It was as if the clouds had parted from on high and Zeus was speaking from Mt. Olympus. I now had the ammo I needed to keep convincing my significant other I am doing the right thing and I am sure a few other people in the room had similar thoughts. I wonder how many people will say, “See Baby? It worked for Grubhub! My idea to turn dead hamsters into drink coasters will totally work because our hamsters, (give sly smile) are organic and died naturally!”

Lean Startup is on to a great thing here and I am looking forward to their next event.

Nope- they started it the same way I started Flyover Geeks- on a wing and a prayer… and a boatload of hard work!

Agree with you across the board Chad!

[…] Domain did a nice writeup on the event over at Flyover Geeks, and thanks to LSC member Subbu Arumugam, we've got videos of both the Talk and the Q&A session on […]