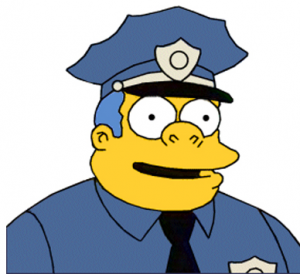 I also take my reputation seriously and have never been one to back down from a fight. But right now I am favoring cooperation over (online) fisticuffs in the spirit of bosting Chicago’s tech scene.

All those things said, I posted a story earlier no doubt some of you read that I then took down. I know you read it because I started getting emails about almost two minutes after I posted it agreeing with me with some of your own stories to tell.

What the was about isn’t important right now though. I decided discretion to be the better part of valor and took the post down so that Chicago can focus on what is important; namely midVentures having a good show and getting entrepreneurs the exposure they deserve.

There will be time a plenty for controversy later; right now this is a great week for Chicago and it is my hope the conference goes well.

As Chief Wiggum would say, “Move along people, nothing to see here.”

Check back in the next hour for a few big announcements!!!

Wow. How can you be taken seriously as a news source when you decide to "play nice" and suppress the news in your own back yard. Lame.

I agree with you 100%. I do not intend to *not* run the story..just delay it a few days. I don't want to hurt (or distract from) entrepreneurs' that are looking to do big things for their companies this week.

I do believe news needs to be reported but I think the timing could be better. Check back in two days for the whole story- and I appreciate the feedback!

Yeah, Kevin, but there's a difference between playing nice for a greater good – cooperation amongst startup culture in a city that desperately needs cooperation- and playing nice at the expense of news. Good journalism is riddled with complexity and doesn't try to remove itself from context. Merely breaking news isn't (or at least it pretends not to be).

We'll have our Angelgate soon enough.

Ron May calls me out and gets it all wrong; Chicago (not) Shocked | Flyover Geeks Reply

Ron May can blow me.