A recently leaked 56 page document detailing Microsoft’s inevitable update of the Xbox console has surfaced on Scribd this weekend. The document purports that the update, referred to as the Xbox 720, will hit store shelves during the 2013 holiday season for $299. 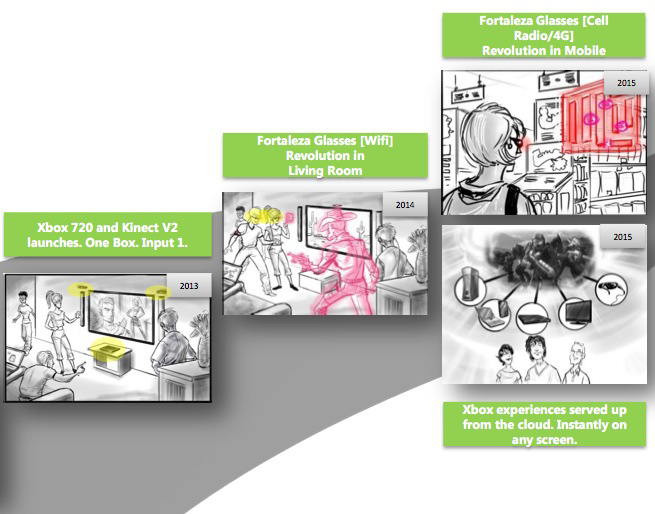 Before we get too crazy, it’s important to remember that this document, while rather impressively compiled, is not yet official, and even if it is the material is from as far back as 2010. Having said that, there are a lot of interesting new details here, so let’s dive in and get responsibly, cautiously crazy.

The document details an Xbox that can achieve six times the performance of the previous model, featuring Blu-Ray capability and full 3D output. For $299, the console will come bundled with Kinect V2. According to the document, Microsoft is planning a 10 year lifecycle for the new console — nearly double that of the Xbox 360.

The Kinect update is reported to be “incremental,” offering more accurate movement and voice detection, in addition to allowing up to four users to play simultaneously. The updated Kinect will also let players use peripherals to compliment motion gameplay, such as a baseball bat for a baseball title.

One of the biggest new features outlined is something Microsoft is calling “Fortaleza.” The service will utilize Wi-Fi enabled glasses, providing an augmented reality gaming experience for multiple players. According to the document, the service will be coming to the new console sometime a year after its launch, and to mobile devices in 2015.

Though the internal document is two years old, it accurately depicts SmartGlass, Microsoft’s second-screen service for mobile devices unveiled during the company’s E3 press conference earlier this month. Microsoft will continue its mission to be the only box in your living room with the 720, which will feature full DVR support from cable providers and utilize SmartGlass to access the content from multiple devices.

The document hints that the always-on living room device will even allow gamers to stream their favorite Xbox games to mobile devices by using the console as a remote server.

The currently unconfirmed document certainly gives a great deal of convincing information on Microsoft’s next-gen console. Official or not, if it has even a bit of truth to it, gamers and media junkies alike are in for a real treat come the end of next year. But don’t hesitate to head over to Scribd to judge all the juicy details for yourself.

Screw Affiliate Links: Get Paid To Pin With Pinbooster