I have recently been discussing the challenges that Chicago startups are facing when looking for tech talent. On Wednesday night, I had the opportunity to attend an event designed to address this chasm, MELD. MELD was developed by the Entrepreneurship and Venture Capital Group at Booth, the Illinois Technology Association (ITA) and the E Club at Kellogg. The event was sponsored by Tribeca Flashpoint Media Arts Academy (who also hosted the event), ITA and The Polsky Center for Entrepreneurship at Chicago Booth. According to the web site invite, “MELD was inspired by the ITA’s Fall Challenge, an effort to make Illinois’ best technology talent aware of great job opportunities available locally”. 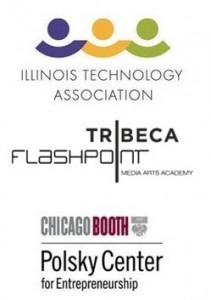 There were 25 startups in attendance and the room was full, with 124 technical experts having registered. The event was kicked off by Linda Darragh from the Polsky Center and Fred Hoch, President of the ITA. I was pulling double duty covering the event for Tech.li and representing 5Degrees, the startup where I work. 5Degrees is looking for a front end developer and we had a steady stream of interested and interesting developers stop by. We demoed our product, talked about the company, handed out business cards and collected a few resumes. I also spoke with a few of the other startups in attendance and they had a similar experience to 5Degrees, a steady stream of people and a few potential employees.

I would like to commend the organizers and sponsors of this event. This is exactly what we need in the Chicago startup community to bridge the gap between the tech folks and the business people, or MELD the two groups, as it were. This inaugural event was limited to startups from Booth and Kellogg, which was appropriate given the genesis of the program and the sponsors. Here is a list of the companies in attendance in search of tech talent:

Hopefully all of these companies came out with a few more connections to the tech talent pool in and around Chicago, as well as some really great candidates for the positions they are looking to fill.

I hope that this formula can be repeated and expanded to the broader startup community to provide a new outlet for local startups looking for and, more importantly, finding tech talent in Chicago.