Engineers at the Monterey Bay Aquarium Research Institute (MBARI) are developing a “power buoy,” which will utilize ocean waves in order to generate electricity in greater capacities than ever before. The project is currently being funded by DARPA, which hopes to one day use the technology for military purposes. 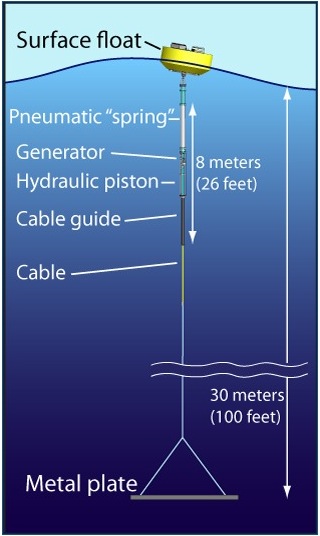 Andy Hamilton, a MBARI engineer working on the project, decided to “go big” after researching the smaller-scale designs of previous DARPA wave energy projects. The result is a buoy eight feet across, connected to a 10-by-18 foot metal plate that catches wave energy below the ocean surface. Despite its size, the buoy was designed to be more of a supplemental source of energy than a replacement for wind and solar generators, Hamilton said.

The heavy plate below stays in place as the buoy rises and falls with the wave motion on the surface, driving the piston connected to the generator with each passing wave. In its current stage the generator is capable of producing 400 watts of power – 100 watts away from the team’s goal.

Throughout development the MBARI team faced a number of problems, including the motion mechanics and energy efficiency of the new buoy. The team had to develop a new system to move the piston back in place after each passing wave, eventually adding a pneumatic spring below the surface to properly set up the piston for its next movement. On board software was implemented to make sure the generator was utilizing its given wave power, where resistance would be increased or decreased to maximize the production of energy based on the current wave speed.

One of the project’s biggest goals is to enable the buoy to act as a charging hub for autonomous underwater vehicles used for marine research. A charging station in the water will enable these robots to operate for much longer than their current one or two day batteries allow. The team’s biggest challenge is to create an optimum docking station for these robots, which will require additional guidance software on their end to connect and charge successfully. Currently marine robots have been able to dock successfully in certain instances but the team is still working on consistency.

MBARI engineers are hoping to make as many advancements as possible on the new buoy before DARPA funding ends in February of next year – a date which will likely be far off enough for the team to finalize the design. “We’ve almost hit our target,” Hamilton said.