Kinect-Enabled Grocery Cart: Hitting A Store Near You? 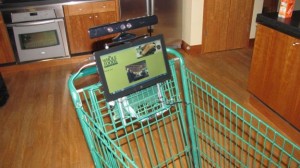 In the near future, your grocery cart might be smarter than you. It might decide what’s best for you. Perhaps even deter you from that tempting pint of ice cream next time you go to the grocer’s. Currently under development, the Kinect-enabled cart follows shoppers around the store and detects what items are placed in it, matching them to a pre-made shopping list.

A multi-company collaboration between Microsoft, Chaotic Moon, and Whole Foods, the cart is designed so that you walk ahead and peruse the offerings while it dutifully trails behind.

Constraints such as allergens, gluten, lactose products, trans fats, and other potential undesirables can be “filtered out” by matching the products to the user-designed list, which features more than just foods, but nutritional content as well.

The Kinect-developed sensor is synced with a Windows 8 tablet for motion control and item detection. It features voice recognition technology that picks up the user’s questions about item location in the store, thus obviating the need to ask a store attendant.

By detecting what items lay in the cart, its built-in bar code sensor can scan each purchase as it is picked up and output a realtime total price for what you’ve bought so that you stay within budget, similar to the virtual “shopping carts” found on websites like Amazon.com.

Rather than waiting in line for a cash register or dumping the goods on a self-checkout band, shoppers will soon be able to just instantly scan and pay items as they lay in the cart, immediately bagging them as they pass through the aisles.

While the product is still far away from becoming a grocery store staple, some companies, like Whole Foods, have released beta versions for testing in a few stores nationwide.