Cards Against Humanity: The Party Game for Horrible People

Self-described as the “party game for horrible people,” Cards Against Humanity is a dark-humored, MadLibesque card game alternative not for the faint of humor. Here’s how the rules go:

“To start the game, each player draws ten white “answer” cards. One randomly chosen player begins as the Card Czar, and plays a black “question” card. The Card Czar reads the question out to the group. Each player answers the question by passing one white “answer” card, face down, to the Card Czar. The Card Czar shuffles all of the answers, reads them out loud in a humorous fashion, and picks their favorite. Whoever played that answer gets to keep the Black Card as one Awesome Point. After each round, a new player becomes the Card Czar, and every player draws back up to ten cards.”

Originally a Kickstarter concept, the product successfully raised nearly four times its projected 4,000 dollar goal in January of last year. Created by a group of Highland Park High School graduates in the Chicagoland area as a party game for a New Year’s celebration, the game quickly grew as the core team of eight writers expanded to include feedback and content from friends and family who played the game.

The first expansion, released last fall, sold out in three days, and occured shortly after the game was featured at the “Big Games” of the IndieCade expo in Culver City. Last March the game took both first and second spot (original expansion set and updated base set, respectively) in Amazon’s Toys and Games section.

Players can download a free pdf of hundreds of cards and create a set at home. Alternately, they could play the game online, create their own personalized deck from scratch, or buy the hardcopy version on Amazon or the game’s website.

So what’s all the buzz about? To get a taste for the game, here are some sample questions: 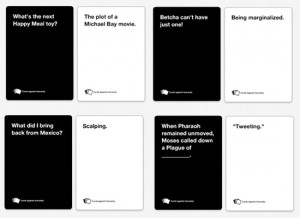 Iconify Stabilizes Your Art Portfolio Across The Web And Mobile Devices

Kinect-Enabled Grocery Cart: Hitting A Store Near You?