Kickstarter is the new go-to if you want to crowdsource funding for a ridiculous gadget, an album of ambient new-age electronica, a videogame that hasn’t been written yet, or a genre-pushing documentary film. Sometimes it separates the wheat from the chaff; other times, less so.

Here are some Kickstarter projects we’re keeping an eye on.

The team of PhD candidates behind Privly want a compromise between online privacy and social networking. The plugin it’s working on encrypts material you post online, but lets trusted friends decrypt it. The team frames the project politically, in light of social media’s role in recent uprisings.

“We love gmail, Facebook, Twitter, and every other communication medium, but we hate handing over rights to our most personal and important communications,” they wrote. “Privly is our solution for people who want to use the newest social networks, but still care about privacy. We also want to protect free-speech from regimes that are trying to limit the internet.”

Of course, if someone with the privileges to view your data copies the decrypted version, they could still share it – but why would you be friends with a backstabber like that, anyway?

Comedian and game-maker Al Lowe churned out adventure games for Sierra during the heyday of point-and-click titles during the late 1980s and 1990s. He’s perhaps best known for the naughty Leisure Suit Larry franchise, which was much more clever and not nearly as raunchy as its detractors claimed, but to which the last 20 years of Hollywood sex comedies remains deeply indebted.

Lowe, who has been in retirement since 1998, has been tapped by Replay Games to oversee a remake of the original Leisure Suit Larry In The Land Of The Lounge Lizards for contemporary platforms. The team says they’ve already obtained the license for the titles, and rewards for certain funding benchmarks include appearing in the game as a non-player character.

Google released a concept video this week for Project Glass, a wearable, glasses-like computing device that it hopes will converge handheld electronics and let users who want to wear an absurd headset carry fewer gadgets.

Working in completely the opposite direction is the team behind Ninja Blocks. The idea is to develop an open source hardware platform for rectangular gadgets – a sort of Lego Mindstorms for the cloud. The internet-enabled devices can issue alerts, collect data with built-in accelerometers and heat sensors, or control other hardware, using what the creators say will be a dirt-simple programming language.

The premise of documentary 20 Years Of Madness is to reunite a team of Detroit amateur filmmakers who produced a public access television show during the 1990s to create a new episode. The question, according to the

“How will the skills learned in film school translate to the show’s guerilla filmmaking style?” they ask. “Can the new episode revive the community they used to share, or will this be the final show?

The Kickstarter page is replete with manic, seizure-inducing animated gifs. A wacky, nostalgic Terry Gilliam-inspired meta-film? How could I not watch it? 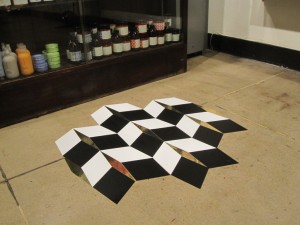 The pitch video for FACET is either deeply ironic or disturbingly sincere. But the project, which takes the form of decorative vinyl floor coverings for the whimsical (or deadly serious) interior decorator to customize, can be used to create some fascinating, Escheresque patterns and illusions.

It’s also appealing because it looks simple, though I could imagine it being frustrating to apply.

“Please note that Facet is meant to be used as a decorative element, not to replacing flooring, address flooring problems or as slip prevention,” the page warns. “It is intended as a one time use product, not intended to be removed and reapplied.”