Starting later this month the Illinois Institute of Technology has announced that it will begin offering iOS development classes at Chicago’s 1871 startup incubator. Though the facility already houses The Starter League, which primarily teaches web coding languages like Ruby on Rails and HTML, IIT will differentiate its program by focusing on mobile development exclusively. 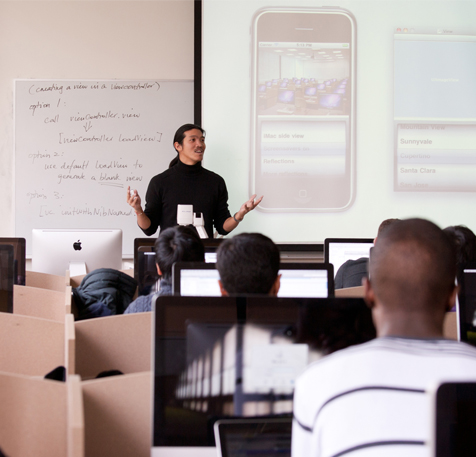 Instructor Michael Saelee in the classroom

On October 26th, the IIT will host its beginning iOS development class that will cover an introduction to the Objective-C programming language, an overview of Cocoa Touch and basic software patterns, including a lesson on laying out user interfaces and building them out with code. The all-day class is scheduled to run again on Election Day and will run just under $400 for general admission. IIT believes that students will get the most out of the class if they come in with at least some level of development experience, though non-developers will still be able to learn the important basics from the seminar.

For those looking to get a much more general grasp on the ins and outs of iOS development, the IIT is offering a more accessible (and affordable) overview class. According to the IIT website, the 75 minute talk will cover “software applications, development libraries, and basic design patterns used in the creation and testing of iOS apps,” with a focus on the Apple native toolchain. During the class, the instructor will demonstrate the development process behind that goes into building basic iOS app. General admission tickets will go for $35, though members of 1871 and IIT staff can snag a seat for a discounted rate on either class.

IIT Department of Computer Science senior lecturer Michael Saelee will teach the mobile development courses. Earlier this year Saelee was was given the Bauer Excellence in Undergraduate Teaching Award for his dedication to IIT student success.

By bringing a piece of its department to 1871, the IIT is hoping to disseminate its 40 years of computer science teaching experience to a whole new group of students who are shaping their own business around mobile technology, or simply want to learn more about the platform destined to be the next frontier of businesses both large and small.

Visit the program website to find out more about dates and pricing of the two upcoming mobile development classes.