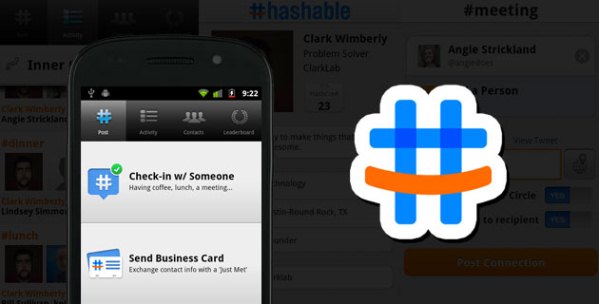 In the announcement, which was emailed out to all Hashable users earlier in the evening, the team wrote, “While we are still very passionate about making better connections and meeting new people, the time has come for us to focus our energy elsewhere.” According to Yavonditte, that elsewhere is mobile ads.

New York City-based Hashable launched in 2010 — after securing $4 million in Series A investment from Union Square Ventures, Jeff Singer, and Rhodium. The service was instantly picked up by early adopters looking for an easy way to manager introductions in person, through email, and on social media platforms.

Hashable seemed to offer that solution, until the service became annoying and confusing. For example, tagging someone on Twitter with #justmet would add them to your Hashable contact list. It soon became apparent that this was a horrible idea at SXSWi in 2011, when the most excited mobile users started spamming their followers’ feeds with the hashtag while they were meeting people at parties.

Although the announcement seemed to be a surprise, there are a few clues that the company was not doing well. In June 2011, CMO Emily Hickey left the company. As the public face of the company, her departure was a sign of trouble ahead. Hashable’s last few tweets were sent on February 29th of this year. In the tweets, the company was trying to sell an extra ticket to SXSWi.

Soon after, Hashable Community Manager Katie Felten announced a new position as the Community Builder at a Milwaukee startup Translator. I asked Yavonditte via Twitter if any members of the Hashable team would be joining him on his new venture. “Just a subset that is right for new project,” he remarked.

While the official Hashable email announcement was vague about the reason it is shutting down, Yavonditte left a few hints in his tweets last night:

Yavonditte admittedly comes from a digital ads background, having been the CEO of Quigo when it was sold to AOL for $340 million in 2007. Quigo was an ad-targeting network that offered advertisers a way to display ads on web pages about specific topics with the company’s AdSonar product.

Now it seems like Yavonditte is gearing up for Quigo part II with a product that will do something similar in the mobile industry. Thanks to his experience with mobile at Hashable, he might just be able to pull it off.