Google‘s self-driving automobile became the first officially-licensed self-driving car in Nevada this week, likely paving the way for other auto manufacturers and researchers to use the state for road tests – or for other states to adopt similar rules. 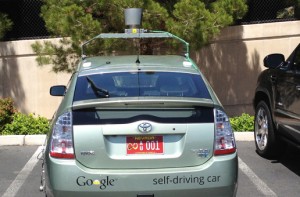 Nevada lawmakers have enacted legislation in the past year that legalizes and regulates the testing of self-driving vehicles on public roads, which made the state the first to do so. Autonomous cars, like Google’s, will be marked with red license plates and subject to scrutiny before being allowed into the program.

“I felt using the infinity symbol was the best way to represent the ‘car of the future,’” said Nevada Department of Motor Vehicles director Bruce Breslow, in a statement. “The unique red plate will be easily recognized by the public and law enforcement and will be used only for licensed autonomous test vehicles. When there comes a time that vehicle manufactures market autonomous vehicles to the public, that infinity symbol will appear on a green license plate.”

Under the new rules, developers are required to submit proof that the vehicle has driven at least 10,000 miles on private roads, and detailed information about the artificial intelligence and safety plan for the car. Officials reserve the right to restrict certain autonomous vehicles to specific terrain types, after reviewing the capabilities of the project.

It is required that two human beings be located in the car, one of them ready to take the controls, at any time that an autonomous vehicle is driving on a state highway.

Some of the new rules charmingly mix familiar requirements with unusual ones. Licensing an autonomous car, for example, costs $100.00 plus $13.00 for each set of plates required – in addition to a Surety Bond of $1 million dollars. Amusingly, an existing Nevada administrative code requires applicants for experimental self-driving cars to verify that they are not the subject of a court order for the support of a child.

The Nevada Department of Motor Vehicles, for its part, may have been seduced by the “coolness factor” of autonomous vehicles. Under the application information, they embedded a number of YouTube videos on self-driving cars by Google, General Motors, and BMW.

According to the Nevada Department of Motor Vehicles, other auto manufacturers have expressed interest in testing self-driving cars in the state.

Consumr Launches iPhone App, Reveals Most Popular Products In US