Google-Backed Wind Power Venture Approved By Department Of The Interior

A Google-backed project to build a heavy duty transmission line for electric power generated with wind turbines overcame a regulatory challenge Monday, when the Department of the Interior found after a year-long review that there is no competitive interest for the use of certain areas of the outer continental shelf. 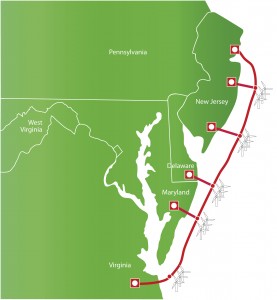 The Atlantic Wind Connection is a proposed transmission backbone that would run along 250 miles of coast from New Jersey to Virginia, connecting the mainland with offshore wind turbines that could generate as much as 7,000 MW of electricity for the grid. The project is one of a number of sustainable initiatives Google has promoted as the company has grown, including seeking company-wide carbon neutrality and investments of nearly $1 billion to date in green energy.

“We’re excited about the potential of this project to help the states meet their renewable energy goals by providing a platform that can rapidly accelerate the deployment of clean offshore wind at lower total cost,” said Rich Needham, Google’s director of green business operations, in a press release. “Transmission is one of the key constraints to the wider adoption of clean energy, so this project was a natural fit with our corporate goal of investing in attractive renewable energy projects that can have dramatic impact.”

Next, the Atlantic Wind Connection will need to undergo an environmental review. And in perhaps the largest challenge facing the project, parties interested in constructing the offshore wind farms will need to be located.

“Many coastal areas in the United States have large population centers on an overstretched grid but limited access to a high-quality land-based wind resource,” wrote Needham in 2010, after Google initially signed onto the project. “These coastal states can take advantage of their most promising renewable resource by using larger wind farms with larger turbines that can take advantage of stronger and steadier winds offshore.”

Wind turbines also made headlines this week when it emerged that a number of well-funded political interests opposed to wind power — with ties, notably, to the anti-climate change movement and oil and gas industries — were ramping up a public relations offensive against green energy with a planned laundry list of dirty tricks, including setting up dummy businesses to purchase anti-wind billboards and and setting up a well-funded, tax-exempt organization to combat clean energy.