Google is partnering with companies like Lego and National Geographic to host a world science fair for the second year in a row. Anyone from anywhere between the ages of 13 and 18 is eligible to enter. The contest takes place online, where contestants must register (with parental consent) and build a website detailing their project.

The video for the event above has a host of ideas like “How can we turn garbage into energy?” and “Can robots change their minds?” Google even has pages dedicated to helping young researchers get started, explaining the judging process and how to best layout their own website. The contest has three winners, selected from age ranges 13-14, 15-16, and 17-18. One grand prize winner is finally chosen of the three. Judges for the competition include professors, explorers, authors, and 2011’s grand prize winner, Shree Bose. Brose won for her project that helped ovarian cancer patients who had built up resistances to certain types of chemotherapy.

Google is pretty serious about prizes for its science fair. Where most schools give you a plastic trophy and send you off to state, Google awards trips to the Galapagos Islands with a Nat Geo explorer, $50,000 scholarships, Lego trophies, and job opportunities at scientific powerhouses like CERN in Switzerland, home to none other than Earth’s ultimate instrument of destruction, the Large Hadron Collider. 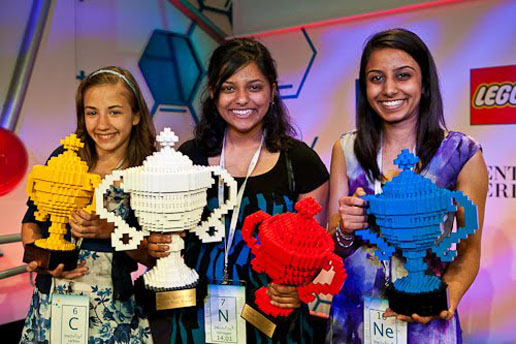 Entry to Google’s world-wide science fair closes April 1st 2012 (hopefully not some cruel prank), so don’t sit on those ideas for too long. If you’re struggling for topics, however, the science fair’s tag line may be its most helpful advice: “Everyone has a question. What’s yours?”

I’m wondering if I can be 17 again. On second thought, maybe not.